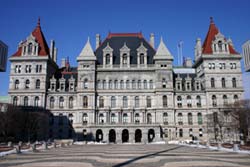 Today, the NY Times launched announced its new editorial series on the incompetence of the NY State government, called "Failed State." A year away from state elections, a fired-up Times rails against the "inbred system [which] allows so many lawmakers to abuse the public trust," summarizing some of the more egregious abuses of the past couple years and some of the major grievances which they plan to address in the series. Warning—if you don't already want to head up to Albany with a pitchfork, you will now:

Their litany of (justified) complaints against Albany is pretty staggering when you take a step back, especially considering how many denigrated officials its spit out. Maybe what's most remarkable is how everyone in town seems to be on the same page these days. This series, together with similar on-going ones by the Daily News and the Post makes a holy trifecta of majorly angry NY dailies demanding reform.

#Albany
#bad albany
#dysfunction
#ny times
#reform
Do you know the scoop? Comment below or Send us a Tip