The NY Times has placed it's first large display advertisement on page A1 today, in a move the, uh, Times says is "a step that has become increasingly common across the newspaper industry." The Times has had small classified ads on its front page, but this is its first foray into much more notice-able front page ads.

The Times introduced other-than-section A front-page advertising in 2006. Those ads cost around $29,500 (as of mid-2008), but the Times isn't saying how much the front page ads cost and points out, "Ordinarily, such space would be coveted by advertisers for its prominence, but it remains to be seen how well it will sell in the current climate, in which ad spending is plummeting." Possible translation: "This could be a real steal!" Gawker says, "It once might have raised hackles for the Times to carry a display ad on the front page. Now the only scandal is that the paper waited so long."

The last major newspaper without front page advertising is the Washington Post; the Media Memo says of the WaPo, "But the Washington Post is owned by a parent company that’s still actually relatively healthy (because it’s not actually a media company, but an education company)." The Times recently took out a $255 million mortgage on its headquarters in Midtown and is looking at selling its stake in a company that owns the Boston Red Sox.

The big winner is probably CBS, which bought the ad: Now, Charlie Sheen makes it onto the front page, yet without a major scandal! (See a larger version of the ad after the jump.) 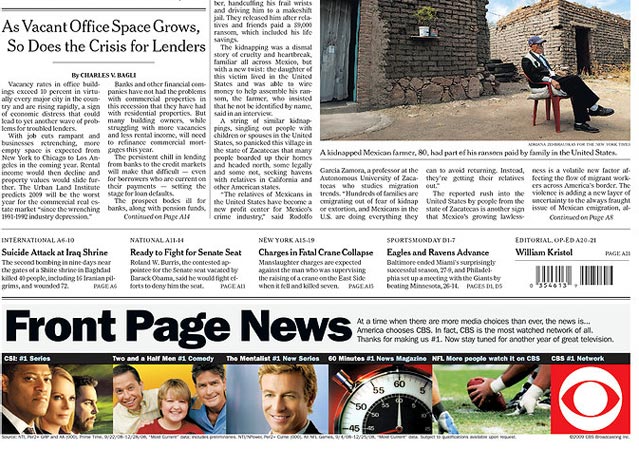 A state senator heard he was banned from MSG. So he tried to go to a Knicks game.

By
Catalina Gonella
News
A state senator heard he was banned from MSG. So he tried to go to a Knicks game.