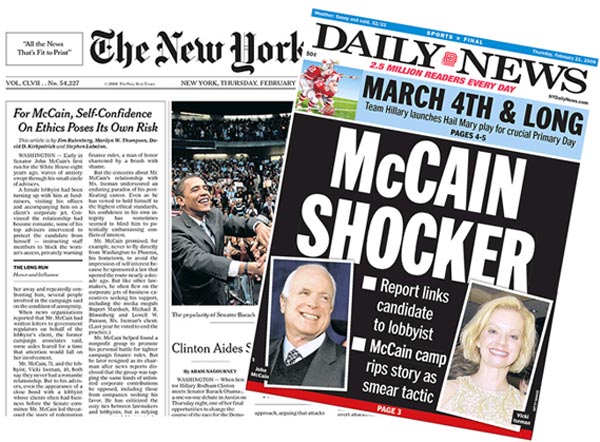 The headline for the above-the-fold NY Times story about presumptive Republican presidential nominee John McCain, For McCain, Self-Confidence on Ethics Poses Its Own Risk, doesn't quite prepare readers for the juicy insinuations waiting for them in the second paragraph. The first sentence notes that during McCain's 2000 presidential campaign advisers were worried because...

A female lobbyist had been turning up with him at fund-raisers, visiting his offices and accompanying him on a client’s corporate jet. Convinced the relationship had become romantic, some of his top advisers intervened to protect the candidate from himself — instructing staff members to block the woman’s access, privately warning her away and repeatedly confronting him, several people involved in the campaign said on the condition of anonymity.

Um, what? The story is, on the surface, about ethics, but the hint of a possible close relationship with lobbyist Vicki Iseman - especially when McCain and Iseman deny any romantic relationship - makes this the kind of thing news pundits blow a gasket over. (Keith Olbermann was literally freaking out during Countdown last night while reporting about it.) And since the article appeared online last night, they've been bloviating about this for hours now.

The story, "part of a series of articles about the life and careers of contenders for the 2008 Republican and Democratic presidential nominations," has been decried by the McCain camp. McCain had previously called NY Times editor Bill Keller to complain (which is mentioned in the article - first hint that the story was being worked on was leaked to the Drudge Report last December) and his communications director Jill Hazelbaker said:

"It is a shame that the New York Times has lowered its standards to engage in a hit and run smear campaign. John McCain has a 24-year record of serving our country with honor and integrity. He has never violated the public trust, never done favors for special interests or lobbyists, and he will not allow a smear campaign to distract from the issues at stake in this election. Americans are sick and tired of this kind of gutter politics, and there is nothing in this story to suggest that John McCain has ever violated the principles that have guided his career." 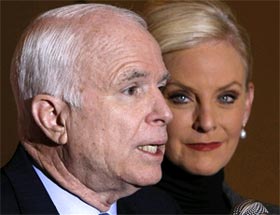 With wife Cindy by his side, McCain gave a press conference this morning denying impropriety, except for the fact that he and Iseman are friends, noting he did take plane rides but they were allowed back then, etc. He said, "I'm disappointed in The New York Times piece." Here's the McCain camp rebuttal to the article.

The NY Times, which had interviewed former McCain aide John Weaver for the story, says it stands by the story. McCain adviser Charlie Black said, "We’re going to go to war with [the Times] now. We’ll see if that hurts or helps.”

The Post doesn't note the McCain drama on its front page, opting for some fun Bill and Hill Photoshop, thus making this a golden opportunity for the Daily News.