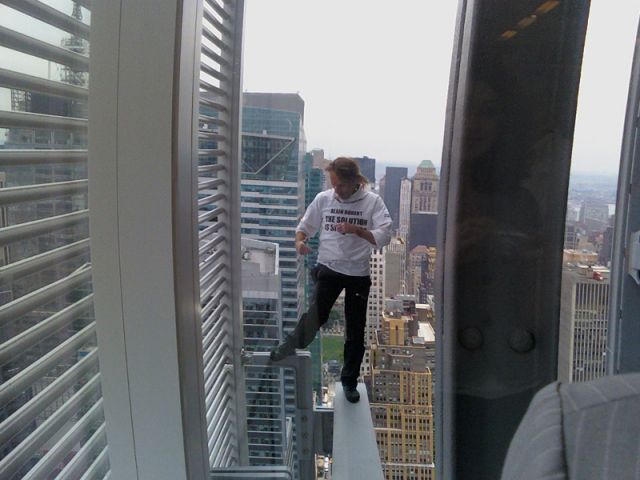 While climbers #2 and 3, Renaldo Clarke and David Malone, were indicted for scaling the New York Times building earlier this year and currently face up to a year in prison, climber #1, Alain Robert, has received a slap on the wrist. With a grand jury rejecting criminal charges this summer, he pleaded guilty yesterday to disorderly conduct (which has no criminal record attached), and was fined $250 and three days community service.

The NY Times reports that assistant DA Heather Person asked that he not be able to serve his hours at an environmental organization because that's what he was promoting with his climb, so he'll be doing his time at the Gay Men’s Health Crisis, a city-based non-profit that provides education about H.I.V. and AIDS. Robert was hoping for no community service, or to serve in France (where he lives), but alas, his "act cost New York taxpayers money." His lawyer attempted to get client off the hook by saying it was "in the best interest of the people of New York, 'that Mr. Robert spend as little time as possible in New York.'"

#Alain Robert
#community service
#disorderly conduct
#guilty
#ny times building
Do you know the scoop? Comment below or Send us a Tip