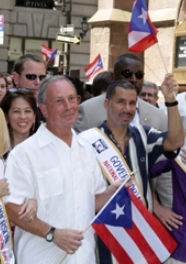 After rumors of Mayor Bloomberg eying the Governor's Mansion in Albany in 2010, a Quinnipiac poll reveals that NY State voters wouldn't mind a billionaire governor. Out of 1,388 NY voters, 30% said they like the idea of Governor Bloomberg.

Current Governor David Paterson was in third place, with 23%--former mayor Rudy Giuliani was in second with 26% (15% of respondents picked Attorney General Andrew Cuomo)! Given that the margin of error is +/- 2.6 percentage points, imagine an election with Paterson, Giuliani and Bloomberg all running against each other!

Respondents were also asked about gay marriage, and the findings were:

Another interesting stat: 63% of Republicans support either same-sex marriage or civil unions (80% of Democrats and 75% of independent voters support either).

#gay marriage
#governor
#governor paterson
#mayor bloomberg
#ny state
#rudy giuliani
Do you know the scoop? Comment below or Send us a Tip