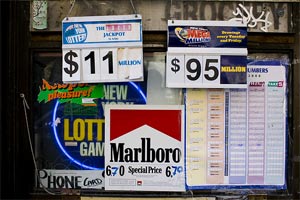 Smokers, you'll need to save up or shell out or simply quit, as state officials have agreed to increase the tax on cigarettes by $1.25, which would give NY State the highest per-pack tax of $2.75. And in NYC, there's that $1.50 tax, so Big Apple residents will have to pay $4.25 in cigarette taxes.

The Center for a Tobacco Free New York believes the tax will encourage 6% of the state's smokers to quit and discourage children from starting, but some smokers think that more people will be heading to Indian reservations to buy cigarettes. Other opponents of the tax said the black market for cigarettes will become more robust, creating a "black market goldmine."

In fact, a 2007 Independent Budget Office report found 27% of NYC smokers bought "under-taxed" cigarettes. Audrey Silk of Citizens Lobbying Against Smoker Harassment told the Sun, "It encourages people not to be ripped off."

NYC has banned smoking in restaurants and bars for five years (!), and now some apartment buildings are including no-smoking rules. And the city's health department runs a very dramatic ad campaign pointing out the dangers of smoking.