Dean Skelos, the Long Island Republican who is the NY State Senate Majority Leader and one of the "three men in a room" who decides Albany policy, is under federal investigation, according to the NY Times.

The Times reports that the feds have been presenting evidence to a grand jury and "served a number of subpoenas in recent weeks, including several to state senators on Long Island, and federal prosecutors have interviewed people who have had dealings with Adam Skelos, the senator’s son."

Prosecutors and the F.B.I. have focused on at least two areas in their investigation of Senator Skelos and his son, zeroing in on the younger man’s business dealings, according to several people with knowledge of the matter.

One focal point has been Adam Skelos’s hiring by an Arizona company, AbTech Industries, as well as a storm-water treatment contract that AbTech was awarded by Nassau County — the senator’s political backyard — even though the company was not the low bidder. Another area of inquiry has been a $20,000 payment to Adam Skelos from a title insurance company that he never worked for.

Later on in the story, there's more explanation about how AbTech, which manufactures sponges to filter pollutants, has a NY connection (apparently two men connected with Long Island-based "Glenwood, which develops rental apartments in New York City," are connected to an AbTech investor). Oh, the potential irony of being felled by a dirty sponge!

Notably, U.S. Attorney Preet Bharara's office went after Sheldon Silver, the longtime Assembly leader from lower Manhattan, for an alleged multi-million kickback scheme. Silver stepped down as Assembly Speaker (Carl Heastie of the Bronx is the current Speaker), but is still a member of the Assembly as he continues to proclaim his innocence. So this finding from the Times is interesting: "Glenwood Management, one of the state’s largest campaign donors, also surfaced in the criminal case against Mr. Silver, a Manhattan Democrat who is accused of steering Glenwood and another developer to a law firm that gave him a cut of their fees. Glenwood has not been accused of wrongdoing in the Silver case or in the investigation involving the Skeloses."

Bharara took over the public corruption investigations left from Governor Cuomo's "ethics" panel, the Moreland Commission. Cuomo pulled the plug on the commission, claiming it was an "overwhelming success." 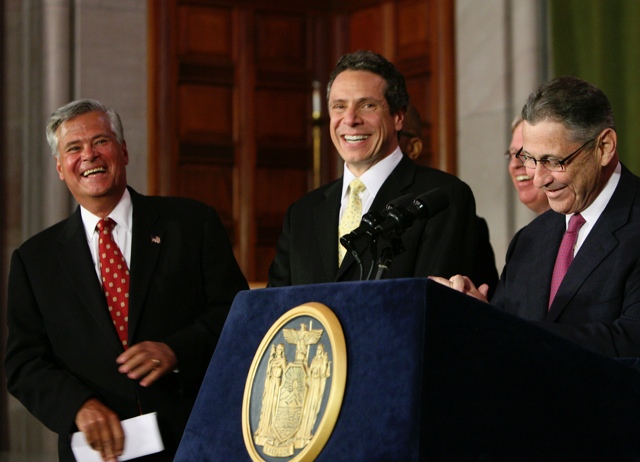 Could Preet be trying for the trifecta?

#Albnay
#dean skelos
#preet bharara
#public corruption
#sheldon silver
Do you know the scoop? Comment below or Send us a Tip