Six weeks is plenty of time.

In Albany, supporters of legalizing adult-use marijuana said this week they’re all-in for passing a sweeping law by June 19th, when this year’s legislative session ends. But it’s far from clear that objections from different camps can be overcome.

“No state has done this legislatively—zero, zip,” said Senator Diane Savino, a Democratic representing Staten Island. “It has all been done through public referendum. There’s a reason for that. The people are always ahead of the politicians.”

She bemoaned not pushing the complicated legislative package through the budget process, which concluded on April 1st. It might have bypassed concerns about everything from law enforcement to social equity, and shielded lawmakers from displeased constituents.

Savino said the pockets of opposition to legalization were persistent, and vocal.

But those are exactly the kind of details that negotiators said they’re hashing out in the hope of reaching a deal next month.

“I think we’ve made tremendous progress,” said Senator Liz Krueger (D-Manhattan), the bill's sponsor in the senate. She said they’ve addressed specific legislators’ misgivings with initiatives—for law enforcement, educational programming and entrepreneurial assistance for minority communities—plus budget dollars to back them up.

“There’s no guarantee we can do it this year, but I’m going to try,” she said, adding that the revised bill, which now includes a slate of proposals from Governor Andrew Cuomo, would probably be released next week.

Krueger said she believed she can get the votes but needs Cuomo’s help.

“It will require, absolutely, the governor’s strong support and willingness to use political capital to get this done,” she said. “It has to be a three-way effort.”

After Albany reached a budget deal without marijuana legalization, Cuomo insisted in an interview on WAMC in April that "we will get marijuana done. It’s not a question of political desire. It’s a question of practical reality of how you put the new system in place, which... is not easy. You still need to control and regulate. You don’t want 14 year-olds having access to marijuana. So how you do it is, frankly, the tougher part of the equation. In the rush of the budget, we couldn’t do it intelligently."

Asked about the current status of marijuana legalization on Wednesday, Rich Azzopardi, a senior advisor to Cuomo, said the governor remains committed.

“The governor has made clear it’s an end-of-session priority and one of the few issues we didn’t get [into] the budget that we want to make sure is enacted before the legislative session is concluded,” Azzopardi said. “We think the proposals are more alike than different, and that everyone’s working in a good-faith effort to get it done.” 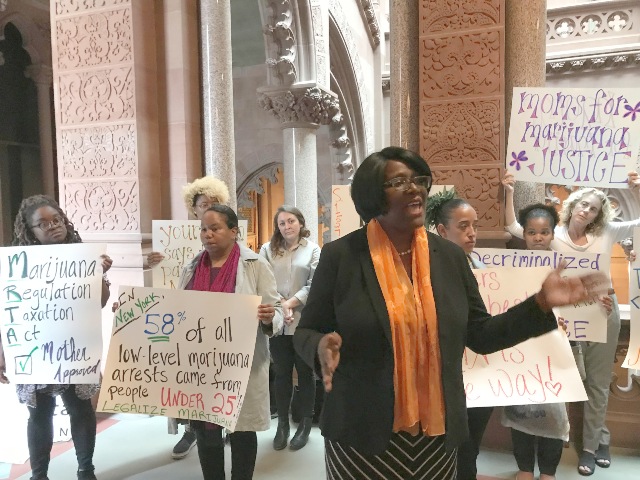 Elzora Cleveland and other activists with Mothers for Marijuana Justice in Albany on Tuesday. (Fred Mogul / Gothamist / WNYC)

On Tuesday, a dozen people associated with the group “Mothers for Marijuana Justice” converged on the Capitol to urge passage of the bills.

“We need to regulate marijuana this legislative session,” said Kassandra Frederique, from the Drug Policy Alliance.

“There is no sense of urgency around it, and we are here with this collective of moms, on the eve of Mother’s Day, asking for a Mother’s Day wish to regulate marijuana this year, in this session,” she said, speaking at a small rally outside the legislature before the group spread out to meet with individual lawmakers.

Democrats have strong majorities in both the Assembly and Senate, but internal divisions (similar to those in New Jersey) have slowed legalization efforts.

Opponents, including parent-teacher associations and police unions, have organized phone-call and letter-writing campaigns hoping to persuade lawmakers—especially ones representing more conservative suburban districts—that legalizing pot would be bad for public safety and health.

“I’ve been getting calls from the schools and the PTAs and law enforcement with concerns,” said Senator Jim Gaughran (D-Northport). “They say they’re already having enough problems with the flavored [nicotine] vaping, and this is the last thing they need.”

But Gaughran, like several other lawmakers, said he would wait to see what the amended proposal looked like before deciding how to vote.

“Those are the kinds of things we would need to see in a bill to win over suburban Westchester, Putnam and Dutchess counties,” he said. “Some constituents would like to see no progress [toward legalization], but what I’m trying to do is manage something I think may be inevitable.”

But Senator Savino now says she’s doubtful of the gaps being closed politically on issues like criminal justice, economic access and public safety, so she’s changed her focus.

She and Assemblyman Richard Gottfried (D-Manhattan) co-sponsored the original medical marijuana bill in 2014, and they want to repair its shortcomings. That law was so restrictive that relatively few patients have been able to get cannabis.

The costs are high, insurance doesn’t cover it, not many medical providers are certified to prescribe it, the list of eligible conditions is short, and the list of licensed dispensaries is even shorter.

“I still fully support adult-use marijuana for all adults,” she said. "This wouldn't be that, but it would be a good step in that direction."