After outrage and despair that the ING NYC Marathon was still going to be held not even a week after Hurricane Sandy hit, as the death toll continues to rise, while many communities are struggling with a massive rebuilding efforts, and others are desperate for power, food and water, the city finally announced that the Marathon would be cancelled yesterday.

Today, the NYRR sent out an email to its members making the announcement, claiming that it was the "resulting extensive and growing media coverage antagonistic to the marathon and its participants," that led to the event's cancellation, and that the 26.2 mile run through all five boroughs would not have taken away from Hurricane Sandy recovery efforts. Hmm—the NY Times reported yesterday, that the race usually has "1,000 full-time police officers and 500 auxiliary officers are stationed along" the course and "But many officers are now working 12-hour shifts maintaining order in hard-hit neighborhoods, at gas stations and elsewhere. Some officers themselves may be without power at home, compounding the strain."

"While holding the race would not have required diverting resources from the recovery effort, it became clear that the apparent widespread perception to the contrary had become the source of controversy and division," the email said. "Neither NYRR nor the City could allow a controversy over the marathon to result in a dangerous situation or to distract attention from all the critically important work that is being done to help New York City recover from the storm." That's right, this seemingly never-ending nightmare of destruction, death and human suffering can't stop the show, blame the media. [You can read the whole letter below.]

Runners, many of whom have trained for the marathon for months, some who traveled from across the state, country and globe to run on Sunday, have harbored mixed reactions to the Mayor's announcement. As of this afternoon, the NYRR's Facebook page had racked up hundreds of comments from participants. Some cheered the organization for canceling: "Bravo, NYRR," wrote one commenter. "There was no way to justify giving out free bagels, bananas and Gatorade while so many people in Queens, Brooklyn and Staten Island have nothing to eat. This cancellation (while not your idea) is correct, and is better late than not at all." Others were a little less enthusiastic. "I think any runners who lifts (sic) a finger to help the very same new yorkers that forced the race to be canceled at ry (sic) last minute is a gutless fool to say the least," one commenter posted.

Many runners were frustrated that the announcement came so late. "As a former New Yorker, I am shocked it took this long for Mayor Bloomberg to do the right thing," Donald Cutler, who had been signed up to run, told the Daily News. "This is ultimately the right thing to do, but it should have been done on Tuesday." And of course: "Thinking of suing Bloomberg. Or fighting him," Steven Wagner, who flew in from Atlanta yesterday, told the Daily News.

There were also number of people signed up to run who voiced relief that the marathon had been canceled, citing how guilty they felt about participating while so many others in 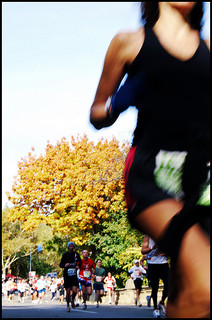 the city were struggling. Brooklyn resident Kai MacMahon, 39, was signed up to run on Sunday; he has a co-worker stuck in Staten Island without power or heat. "I love running, NYRR and the NYC marathon, but given the circumstances, canceling is just the right thing to do," he told the Daily News. "The city is suffering. How would I have looked my co-worker in the eye on Monday morning if the race had gone ahead?"

Long-time marathoner Nicholas Thompson, who was also signed up to run tomorrow, penned a New Yorker blog post entitled "Why I'm Glad I'm Not Running The Marathon This Year," noting the event seemed "divisive and petty at a time for unity." "The reason the marathon is such a beautiful race is that it pulls the city together," Thompson writes. "This year, it was just going to tear everyone apart."

Financially, the repercussions of the marathon's cancellation will be massive. The marathon generates about $340 million in spending and hotels, restaurants and businesses along the route often rely on the weekend for a significant portion of their annual revenue. "It's our busiest weekend of the year," John Teevan, who owns the Baker Street Pub on First Ave and 63rd St, told the Times. "I wish the mayor had made the call earlier because we brought in extra food for Sunday." And the NYRR, which makes more than half its revenue off the event, certainly stands to suffer, though the Times says they seem to be standing by the organization's no-refund policy when it comes to the race's pricey entrance fees. 2012 entrants will be guaranteed entry into next year's marathon, or, if they choose instead, the 2013 half-marathon in March.

This isn't the first time the NYRR has had to double back on one of their decisions; earlier this year, they reinstituted baggage check at the NYC marathon after an announcement that it would no longer exist elicited complaints. Meanwhile, the organization will donate marathon resources and materials to the hurricane recovery effort (including, hopefully, those super-powerful generators!) and is giving $1 million in aid, so perhaps some good can come of this whole, awful mess.

It is with heavy hearts that we share the news that the 2012 ING New York City Marathon has been canceled.

The decision was made after it became increasingly apparent that the people of our city and the surrounding tri-state area were still struggling to recover from the damage wrought by the recent extreme weather conditions. That struggle, fueled by the resulting extensive and growing media coverage antagonistic to the marathon and its participants, created conditions that raised concern for the safety of both those working to produce the event and its participants. While holding the race would not have required diverting resources from the recovery effort, it became clear that the apparent widespread perception to the contrary had become the source of controversy and division. Neither NYRR nor the City could allow a controversy over the marathon to result in a dangerous situation or to distract attention from all the critically important work that is being done to help New York City recover from the storm.

NYRR, in partnership with the Rudin Family and the ING Foundation, has established the "Race to Recover" Marathon Fund to aid New Yorkers impacted by the storm. Over $2.6 million has been raised, including a $1 million donation by NYRR. We are asking you to join us by making a $26.20 donation, or whatever you can afford, to help bring recovery and hope to those communities and families most affected. Proceeds will go to Hurricane Sandy Relief, administered by the Mayor's Fund to Advance New York City. You can also donate to the relief effort through NYRR's fundraising platform, CrowdRise, which includes the American Red Cross and other charities.

NYRR will redeploy the marathon resources and materials toward the recovery effort. We will share the details of this project as they are finalized in the days ahead.

We all recognize this has been a very challenging time in New York City that has impacted so many people, including you, our runners. Please know that this is one of the toughest decisions we have ever made, and that we deeply appreciate your support.