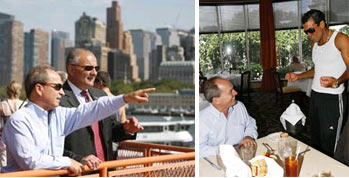 Yesterday during Belmar, NJ Mayor Ken Pringle's tour of Staten Island, the NY Post sent a reporter dressed as a guido to confront him. The mayor was in Staten Island for a photo op tour in an attempt to smooth relations over with the borough after a stir arose around comments he made in a newsletter about guidos and "over-bleached blondes" from Staten Island who visit the Jersey Shore town throughout the summer.

As Pringle was having lunch at the Staten Island Hilton with the hotel's owner and borough officials, Post reporter Justin Rocket Silverman strolled over, wearing a wife beater and fake Rolex, along with a spray-on tan. Silverman approached the mayor on behalf of all guidos asking, "Hey Pringle, why are you breaking my balls?" To their credit, the mayor and his wife seemed to take the joke in stride, more than you can say for Staten Island residents who had been calling for a boycott of the beach town when the newsletter remarks first surfaced.

The Post put up a video of the confrontation (after the jump), where you can decide who's more awkward: the mayor and his forced politeness or the reporter and his attempt to improvise with what little script he had for the stunt.

#belmar
#guidos
#mayor ken pringle
#nj vs nyc
#ny post
#nyc vs nj
#staten island
#staten island vs belmar
Do you know the scoop? Comment below or Send us a Tip