NY Officials Are On A Marijuana Legalization Listening Tour

Dozens of people showed up to Boricua College’s Bronx campus Monday evening to tell representatives from the State Health Department their thoughts on marijuana legalization.

It was the first of five public forums that will be held in each of the boroughs to inform new legislation being drafted by a marijuana legalization work group Governor Andrew Cuomo convened in August. The goal is to introduce a bill for state lawmakers to consider in the upcoming legislative session (although Senator Liz Krueger has already introduced a Marijuana Regulation and Taxation Act). The listening sessions kicked off in Albany earlier this month and will continue across the state through mid-October.

Although some who spoke at the forum Monday evening expressed concerns about the public health impact of regulating marijuana like alcohol or cigarettes, most said they strongly supported legalization. But proponents urged the state to take care in designing the new regulations to correct the harms that have been done to communities of color through the lopsided enforcement of marijuana laws thus far, and to ensure that the legal marijuana industry doesn’t become dominated by big corporations and venture capital.

Marijuana has been legally available for limited medical purposes in New York since early 2016 but Cuomo didn’t signal that he would come around to the idea of legalizing it broadly for adult use until January of this year, noting that several states surrounding New York now either have recreational markets of their own or are likely to have them soon. Cuomo announced the legalization working group after a study he commissioned from the state Health Department on the benefits and drawbacks of legalizing marijuana came out in favor of the move in July.

Recommendations from speakers included reinvesting tax revenue from legal marijuana in job training and education in areas that have been disproportionately affected by marijuana arrests, expunging and sealing people’s criminal records for marijuana offenses and making it easier and less costly to get a license to grow or distribute marijuana than it has been in the state’s highly restrictive medical program.

Ariel Bizardi, a Bronx resident who works at a housing nonprofit, heard about the forum on Bronx 12. He said he owns property near Syracuse and aspires to participate in the industry as a grower. “I grew up in the South Bronx, so I know how the police treated the inner city,” Bizardi said. “I have friends whose lives were ruined. They couldn’t get a job because they smoked a little weed. So when prohibition ends I’m looking to create jobs for the same people who were persecuted.”

Mayor Bill de Blasio announced in June that the NYPD would stop arresting people for most low-level marijuana offenses after facing mounting criticism over stats showing the overwhelming majority of those arrested in the city were black and Latinx, despite evidence that they use cannabis at roughly the same rate as whites.

However, there are still myriad ways in which the criminal justice system can use marijuana to target those groups that should be addressed when the drug is legalized, said Eli Northrup, an attorney with the Bronx Defenders.

For instance, he said, “Law enforcement needs to be prevented from using the odor of marijuana to stop people” on the street, a move that he described as the new “de facto stop-and-frisk” after that practice was officially abandoned.

“Any legalization bill must explicitly state that the odor of marijuana does not provide law enforcement with reasonable suspicion to search and arrest somebody,” Northrup said.

He added that marijuana use is still often used to justify actions against people in family court, housing court, civil proceedings and immigration proceedings. 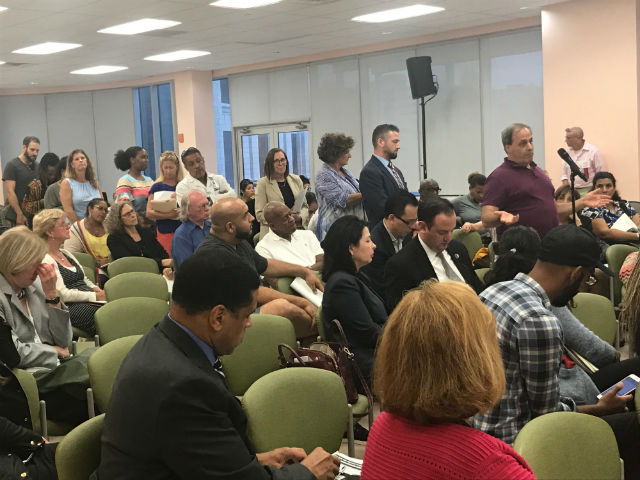 One Bronx resident said he was concerned that marijuana would be outlawed in public housing projects the way cigarettes have been, and just act as another measure that could perpetuate discriminatory enforcement practices. “It shouldn’t be against the law for someone to smoke [weed] just like it’s not against the law for a person to get drunk, as long as it’s not offending the neighbors,” he said.

Some of those who spoke out against marijuana legalization argued that since it would not automatically make the enforcement of marijuana laws equal and fair, that aim shouldn’t be used to justify it. Marijuana arrest rates for black and Latinx youth actually rose in Colorado after the drug was legalized for adult use.

“Legalization in New York state would really mean commercialization, just as it has in every other state that has legalized,” said Ellen Morehouse, a licensed clinical social worker based in Tarrytown, NY, who said she understood the social justice argument but was concerned people would become dependent on marijuana and need drug treatment. “Big Marijuana will be Big Tobacco. In most of the states there are coupons, there are advertisements and there’s fierce competition.”

Northrup, the Bronx Defenders attorney, argues there are limits to the reforms that can be achieved without full legalization, though. For instance, while a district attorney could consent to expunge someone’s record of a marijuana conviction now—as the Brooklyn DA is doing—he said legalizing marijuana in the right way could make that process much more seamless.

The dates and locations for upcoming listening sessions on marijuana legalization can be found online here.

#andrew cuomo
#marijuana
#marijuana legalization
#war on drugs
Do you know the scoop? Comment below or Send us a Tip