The 2012 election was a historic night in New York: Grace Meng, the Queens Democrat, become the first Asian member of Congress from the state and Sean Patrick Maloney, a lower Hudson Valley Democrat, is now NY's first out representative.

Meng, who won with 68% of the vote against Republican Dan Halloran, is taking retiring Rep. Gary Ackerman's redrawn district, which has a large Asian-American population. There was a cloud over her campaign: The fraud charges against her dad, former Assemblyman Jimmy Meng.

She thanked supporters by way of Twitter, "Thank you all for this victory...I am humbled by the trust you've placed in me and excited about the work ahead of us." And at her victory party, Meng said, “More women in government means practical attention on how families educate their children, how they pay their bills, how they worship, how they participate in their community, and how they plan for the future.“ 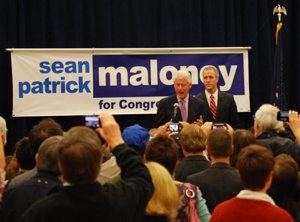 Her spokesman also told Politicker, ”There’s no denying that her candidacy is historic. But as proud as Grace is to be a Chinese-American woman, she’s equally as proud to be a woman, a mother, and that speaks to the people in the district who are not Asian-American."

Maloney, a former Clinton aide, took the 18th District by 51.7%, to Republican incumbent Nan Hayworth's 48.3%. Hayworth called Maloney, who lived in NYC, a carpetbagger, while Maloney noted her a Tea party support and alignment with Rep. Paul Ryan's budget. He told supporters, "I'm headed to Congress fired up and ready to help make this country a place where the words 'equality' and 'opportunity' carry serious weight."

Hayworth had an unfortunate moment when one of her advisers suggested that people throw acid on female Democrats. She conceded this morning—via email: "The election of 2012 is over, and while the results didn't go our way, nobody could've fought harder or more honorably than our team."