Since shortly before the late deadline to register to vote in the April 19th presidential primary in New York, state Board of Elections spokesman Tom Connolly said his office has been fielding nearly 100 calls a day from voters who are "pissed off" about their registration status, for one reason or another. On social media, there are dozens of reports from voters who say they checked their registration online recently and found that their party affiliation had been switched, which is disqualifying because New York's primaries are closed, or that that their registration couldn't be found altogether.

We could not verify the details of the majority of those accounts, but the discoveries alarmed many would-be voters, most of them seemingly Bernie Sanders supporters. Sanders fans are already on tenterhooks over long lines at the polls in Arizona, which the Justice Department is now investigating, and polling place electioneering by former president Bill Clinton in Illinois and Massachusetts, which local election officials declared proper, among other factors that they argue have skewed the primary process for Hillary Clinton.

Apparently my voter registration (less than a year old) has been purged. Way to go #NewYork

At the New York Board of Elections, Connolly said that his office looks into all complaints, and though the volume has been higher this year than his office has ever seen, "I've yet to come upon any example of any kind of mal-intent or inappropriate change of a voter's record."

Rather, he said, the increased call volume can be explained by heightened interest in this year's primary and New York's newfound relevance to the nomination. As for the complaints themselves, the circumstances vary, but he said there's a rational explanation for each instance of seeming irregularity. For one, he explained that the complaints are largely coming from Democrats—"a lot" of them Sanders supporters. (There have also, he noted, been some Donald Trump supporters who are angry that they missed the deadline to change their party to Republican.) Because many voters only turn out for presidential elections, and Democrats didn't have a primary in 2012, it has been eight years since many people thought about their registration, he said.

In the interim, he said it's possible that people moved, or filled out forms at the DMV or elsewhere changing their party, and forgot to square away their new address or newfound interest in politics before New York's October 2015 deadline for changing parties, the earliest in the country.

"A lot can happen in eight years as far as moving around, not being aware, and filling out forms," Connolly said. "They just have this in their head that they should be a certain way, and when they find out that they're not, and it's too late to change it, they're usually pretty upset. I understand that, but there's nothing I can do about changing the laws." 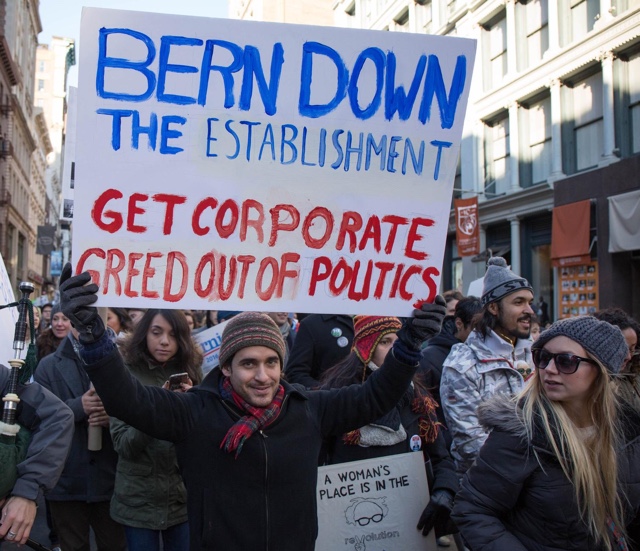 There are also clerical errors. For example, my wife has been a registered Democrat at our current address in Brooklyn since October 2012, yet when she checked her registration status online earlier this month, the BOE search tool indicated that her name could not be found. It took a good 15 minutes on the phone with Connolly to figure out what had happened. It turns out that the state has my wife on file as an inactive voter at an old address from 2007, and that her current registration entry not only misspells her last name, leaving off a letter, but it gets her birth year wrong (that might explain all those cemetery plot and AARP solicitations we've been getting—Kings County thought that she was 90!).

In the process of tracking this down, Connolly shared some other alarming details of how the Board of Elections stores data, namely that only the individual county offices have complete records on voters, whereas the state only has the most recent iteration of one's voter registration. This means that to get to the bottom of why something weird is happening with an entry, only the county can pull the file to see all the address changes, voter history records, DMV forms, and so forth. What's more, there is no standard for how the data is kept at the county level, so it varies wildly from one district to the next, and in New York City, falls to the various arms of the city Board of Elections, a dysfunctional, patronage-infused agency that recently refused to apologize for sending misleading mailers about the primary date to 60,000 voters.

When at first Connolly couldn't find my wife's records, he speculated that the update to the state database might have "got stuck somewhere along the way" from the county's computers. When asked what he meant by "got stuck," he explained, "Any time [county officials] change a voter record, it's supposed to send updates to our system. There are times where that’s not the case."

For an example of how sloppy information storage puts voter registration information at risk, consider that in December a computer security researcher found an easily accessible database containing 191 million voters' records. The entries included name, address, date of birth, gender, ethnicity, date of voter registration, phone number, party affiliation, email address, voter ID, whether one is a permanent absentee voter, and whether or not one is on the Do Not Call list. The database was reportedly associated with the campaign-serving company NationBuilder, which packages the voter data states are required to give to candidates. The company said the breached database wasn't one it directly managed, and the security hole was eventually closed after being publicized, but the database's owner never came forward.

Who accessed the data, and what if anything has been done with it, is also unknown, but the possibilities are sinister.

In another instance of New York state confusion, Bernie Sanders supporter Jonathan Carrillo, a Long Island resident who makes a living DJing under the name Jase, registered as a Democrat the week of the deadline and, last Friday, checked his registration online and found himself listed as a Republican. This would make him ineligible to vote in the upcoming Democratic primary. Having followed the news and online chatter about irregularities in other states' primaries, it occurred to Carrillo to record part of his call to the Nassau County Board of Elections.

In subsequent conversations, election workers pulled his file and found that a 2013 DMV form shows he chose Republican when getting a license, something he seriously doubts.

"I think it’s very unlikely that back in 2013 I randomly decided to join the Republican Party against my interest and while opposing their views," he said. "I would never do this intentionally."

Carrillo's voter history shows that he has never voted, which he says proves that he never meant to join the Grand Old Party. So what does he do now? It turns out that on primary day, county Election Boards have judges on hand to hear explanations like Carrillo's about voter registration mishaps and, if they find cases compelling, issue court orders directing poll workers to allow those people to vote. The alternative for Carrillo would be filing a provisional ballot, in which he would explain his circumstances for Elections Board workers to consider after all the votes are cast, and then count or not count it.

Connolly said that he couldn't speak to the specific circumstances of Carrillo's case, but given the basic outlines, if Carrillo filed a provisional ballot, "quite honestly, the board would probably not count it," because election commissioners would look at the available data, and that data would show he registered as a Republican.

The bottom line for voters with questionable registrations, Connolly said, is, "If they really think they are entitled to vote, they should exercise that right, whether it be by affidavit ballot or by talking to a judge and getting a court order."

Carrillo said he plans to go the judge route on primary day, but he remains mistrustful of the state's democratic mechanisms.

"I think it’s very difficult to vote," he said. "It’s jumping through hula hoops and whatnot in order to just cast a vote. I feel like it’s done intentionally. There’s easily corrected mistakes but it’s hard to [correct them]."

The DNC says it is looking into any and all reports of election problems, but wouldn't say whether it has seen anything unusual in New York so far.

“The DNC takes any and all reports of voting irregularities seriously," spokeswoman Deshundra Jefferson said in a statement. "Our Voter Expansion Department has strict orders to help all voters - not simply Clinton voters or Sanders voters or Democratic voters."

The New York primary is on April 19th, with 95 delegates up for grabs on the Republican side, and 291 on the Democratic side. Several of 44 Democratic super-delegates, party operatives not beholden to the will of primary voters, told the Daily News they plan to support Hillary Clinton even if she loses.

Trump has 758 of the 1,237 delegates he would need for the Republican nomination, assuming party insiders don't refuse at the convention. Ted Cruz has 499. Clinton has won 1,298 delegates to Sanders's 1,089, according to FiveThirtyEight, which is not counting super-delegates because they're allowed to change their minds up till convention time.

If you think something is wrong with your registration, Connolly says to call your county Board of Elections before trying the state's one. If the issue is not resolved by primary day, you have the option of pleading your case before a judge at your local county Board of Elections office, or filing a provisional ballot and hoping it doesn't get thrown out. If you're upset about New York's election laws, Connolly says you ought to contact your local legislators.

For more information on how to vote using an absentee ballot, click here (the deadline to request one is April 12th).