An off-duty police officer's fatal shooting of a driver in Brooklyn is being handled by both the NYPD's Force Investigation Division as well as NY Attorney General Eric Schneiderman's office. The apparent road rage incident was sparked by the civilian driver's belief that the cop, who had just finished his shift, had cut him off.

The police officer, Wayne Isaacs, 37, was driving his 2002 Nissan Altima around midnight on Monday morning when he got into the dispute with Delrawn Small, 37, who was in a 2016 Kia EX, at Atlantic Avenue and Bradford Street. From the NY Post:

Small had turned from a side street onto Atlantic and became furious because he believed that Isaacs had cut him off.

Small allegedly chased the officer, who was wearing civilian clothing, about seven blocks along Atlantic Avenue until both men stopped at a traffic light at Bradford Street, with a taxi between them.

When the cabby pulled away, Small — who was traveling with his girlfriend, Zaquanna Albert, 35, their 5-month old son and one of Albert’s teenage daughters — allegedly jumped out of his car and charged over to Isaacs.

The police say that Small "approached the off duty officer, who was still seated in his vehicle, and began to punch him repeatedly in the head through the car window," and Isaac then discharged his gun at Small. 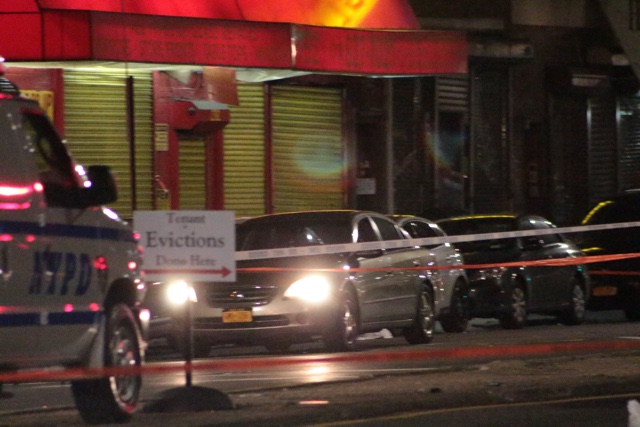 NYPD at the scene of the shooting (Mark Mellone)

Small, who has a criminal history including three stints in prison, was pronounced dead at the scene.

The Daily News reports, "A video camera captured Small, who was two cars in back of Isaacs, exiting his car when both vehicles reached a red light, according to cops, who refused to release the video."

Further, sources tell both the Post and News that Small's girlfriend, Zaquanna Albert, told investigators that he had three drinks at an earlier barbecue, had a "hair-trigger temper," and "rebuffed her when she begged him not to get out of his car". The Post adds, "She also told cops that Isaacs exited from his car before opening fire. But spent shell casings were found inside his vehicle, raising questions about her version of events, sources said."

Small's family's lawyer said the cop "could have rolled up his window, he could have driven away. He did not have to shoot him."

On Facebook, Albert wrote, "Words can't begin to explain. The pain I feel right now. I appreciate all the prayers and well wishes. But my heart aches for this Man and my son who will never remember his Dad and a Great dad he was to my Baby." 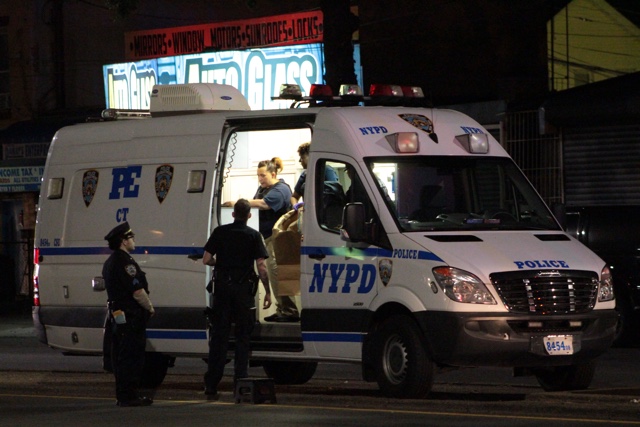 NYPD at the scene of the shooting (Mark Mellone)

In the wake of fatalities at the hands of police officers, including Eric Garner's, the Attorney General's office investigates the deaths.

Yesterday, Police Commissioner Bratton said, "It’s much, much too early to draw any conclusions at this time. It is a protocol that our Force Investigation Division will do a very comprehensive initial investigation. We’re gathering a lot of video from the area, cameras that we were able to identify. We have talked with the officer."

According to court records obtained by the Post, in 2014 the City paid $20,000 to settle a lawsuit accusing Isaacs and another officer of beating a man while yelling a racial slur.

#brooklyn
#delrawn small
#nypd
#police shooting
#road rage
#wayne isaacs
Do you know the scoop? Comment below or Send us a Tip