Numbers Show NYPD Tasers Are Less Effective, And The Consequences Can Be Deadly

by George Joseph and WNYC Staff

Last month, New York police got a 911 call from a Bronx building superintendent who was upset at a tenant for banging on his neighbors’ doors.

Two officers headed to the apartment and knocked on the door. Inside, they found 32-year-old Kawaski Trawick in his underwear, clutching a stick and a kitchen knife. They ordered him to drop his weapons multiple times, according to the police account. When he did not obey, an officer fired his Taser.

The electric discharge knocked Trawick to the ground. But as the cops moved in, police say he jumped to his feet and charged at them. An officer then shot him four times with a lethal weapon: his gun. Trawick was declared dead at Bronx Lebanon Hospital less than an hour later.

Axon, the company that makes Tasers, otherwise known as stun-guns, markets them as the most effective non-lethal weapon for police to subdue someone without endangering themselves or killing the suspect.

But incidents like Trawick’s fatal encounter with police appear to be a growing problem, according to a new investigation by APM reports. Police data from across the country show that Tasers are not as effective as the company claims. And numbers from Los Angeles, Houston and New York shows that newer models—introduced after a series of wrongful-death lawsuits involving the old higher-powered models —are failing more often.

The NYPD began deploying the newer Taser, known as the X-26P, in 2017. At the time, the department said it would increase officers’ ability to rapidly incapacitate a target while boosting safety levels.

But NYPD data released to APM Reports in partnership with Gothamist/WNYC show decreasing effectiveness with the new weapons. Following discharges from its older model, the subjects continued to resist, to escalate, or to attack officers 25 percent of the time. With the newer Taser, subjects fought back in these ways 36 percent of the time.

The NYPD also categorized just 71.9 percent of X-26P uses as effective, down from 78 percent with the older model.

It is unclear why newer Tasers are producing lower performance numbers. But some experts have argued the decreases may stem from the fact that newer Taser models, like the X-26P, feature far lower maximum charges than previous models.

Ineffective Tasers pose safety concerns for both officers and the public, says Joseph Giacalone, a retired NYPD detective sergeant and adjunct professor at the John Jay
College of Criminal Justice.

In an interview, NYPD officials did not dispute the numbers, but argued the public should not read too much into them.

Detective Louis DeRespiris of the NYPD’s Firearms and Tactics Section said the data was based on officers’ subjective interpretations when filling out forms.

NYPD Inspector Richard DiBlasio, who commands the unit, also noted that different suspects also react differently when they are hit with a Taser.

“A lot of other things come into play: the apprehension of the individual, the tactics that were used, were they able to subdue them and take them into custody in a safe manner,” he said.

DiBlasio said the devices are effective at keeping both officers and the community safe, pointing out that officers now have a better alternative to guns. In a statement to Gothamist/WNYC, Axon, the taser manufacturer, said its own testing showed that innovations in its newer tasers, like the X26-P actually provide "increased effectiveness."

Alex Vitale, a professor of sociology and coordinator of the Policing and Social Justice Project at Brooklyn College, argues both high and low powered Tasers pose a danger to civilians. He believes the city should focus instead on diverting more of these cases, such as those involving the mentally ill, to non-police responders.

“In dealing with someone who might be potentially volatile, or even violent, the police normally use a kind of command and control presence,” he said. “Dealing with someone having a mental health crisis might require a total opposite kind of response.” 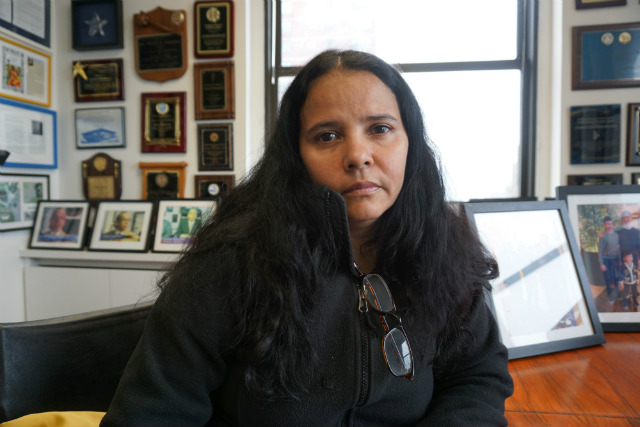 Take the 2016 death of Ariel Galarza, a developmentally disabled Bronx resident. Galarza’s neighbor called police after she heard him shouting at an imaginary man. When officers arrived, he was sitting at his table, motioning at a man who wasn’t there.

Police commanded him to get on the floor. Instead, they said, he stood up, raised the bottle of hot sauce in the air and began advancing towards them. An NYPD sergeant fired his Taser, knocking him to the floor. But before police could cuff him, he began screaming and tried to get up. The sergeant shocked him again, but he continued to struggle and shout incoherently. Finally, the officer put the weapon directly on his shoulder and pulled the trigger.

Galarza rolled onto his stomach and officers handcuffed him. Moments later, police noticed his skin turning blue. By the time EMTs arrived, he was in cardiac arrest. Galarza was pronounced dead less than two hours later at the hospital.

Galarza’s sister Mildred wishes her brother could have received a therapeutic approach in response to the 911 call about him.

“I just feel that a police officer should have sat on the table. My brother was sitting on the table. Should have pushed back the chair, and asked, ‘What’s going on?’ ‘Do you need some type of help?’ ‘Do you want me to call paramedics?’ You know? That’s what I feel should have been done.”

Galarza, who has filed a wrongful death lawsuit against the NYPD, says she hopes the department will abandon Tasers and begin dispatching alternative responders. Paramedics, she said, would have intervened with her brother in a different way.

George Joseph can be emailed securely with a protonmail email account at gmjoseph@protonmail.com. You can also text him, via the encrypted phone app Signal or otherwise, at 929-486-4865.

#less lethal weapons
#nypd
#taser
#original
Do you know the scoop? Comment below or Send us a Tip