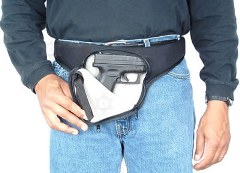 In a city whose mayor has made gun control one of his signature issues, it's no surprise that the number of registered gun owners has gone down. The Post reports that there are now 36,169, versus 38,000 last year. Permits that allow one to wear a gun on a holster (concealed) also dropped to 2,555, which the Sun says is almost 50% less than the 2004 number. Of course, there's now way to estimate illegal gun ownership.

The NRA's belief is that the downward trend shows how NYC only gives licenses to the rich, with their spokesperson telling the Sun, "If you're a plain Joe or Jane, you're out of luck, and they're the people who really need protection." Well, apparently the U.S. is the most armed country in the world, with 90 guns for every 100 citizens, according to the Graduate Institute of International Studies. Next is Yemen with 61 guns per every 100 citizens.