A relative of one of the 20 people killed when a stretch limousine crashed in upstate New York says that one of the victims thought the vehicle was in "terrible condition." Valerie Abeling, aunt of victim Erin McGowan, told the Washington Post:

[T]he group had rented “some kind of bus” to go the Cooperstown but the vehicle broke down before reaching its destination. The travel provider then sent a stretch limousine to take the group the rest of the way.

As the investigation begins, National Transportation Safety Board chairman Robert Sumwalt said, "Twenty fatalities is just horrific. This is the most deadly transportation accident in this country since February of 2009."

Just now, at the Columbus Day Parade, Governor Andrew Cuomo said that the limousine "failed" a state inspection and should never have been on the road. He added that the driver, Scott Lisinicchia, 53, "did not have the proper license" to drive the customized 2001 Ford Excursion limousine and the owner of the limousine company, Prestige, "has a lot to answer."

On Sunday, Cuomo had expressed his condolences and asked that all "State agencies to provide every resource necessary to aid in this investigation and determine what led to this tragedy" on Sunday,

The limousine, carrying 17 passengers and a driver, was traveling on Route 30 in Schoharie when state police say that it failed to stop at the T-intersection with Route 30A around 2 p.m. on Saturday. The limo then continued into the parking lot of the Apple Barrel Country Store, where it hit a parked car and two pedestrians, who were also killed. 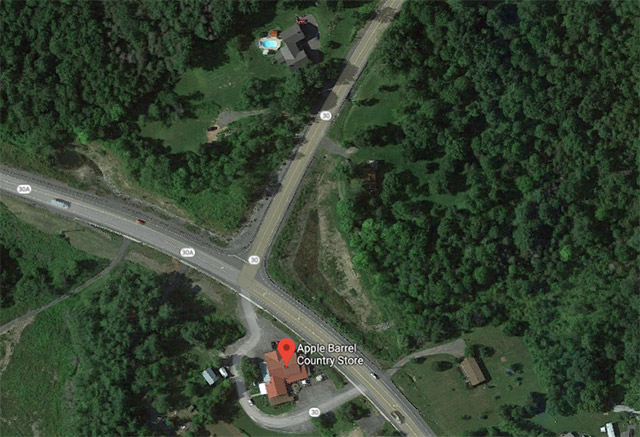 Apple Barrel manager Jessica Kirby told the NY Times the limo "was coming down that hill probably over 60 miles per hour," adding, "I don’t want to describe the scene. It’s not something I want to think about."

#518news #schoharie Emergency vehicles surround the Apple Barrel Cafe at Route 30 and Route 30A in Schoharie after a van style limousine and an SUV collided injuring several and killing approximately 3 people. pic.twitter.com/6HGfHcBkx9

Schoharie Town Supervisor Alan Tavenner also called the intersection "very dangerous," noting that there were "at least two instances where tractor trailers lost their brakes and went through the intersection." Following those incidents, the state Department of Transportation has banned them from the roads.

"We thought it was an explosion. Someone said, 'There's a body laying right next to your car.' That was it. We just got out of the car and ran into the restaurant as quickly as possible," Linda Riley, who had parked her car at the Apple Barrel, told the Times Union. "Everyone was screaming, 'Call 911, does anyone know CPR?' And then the cops arrived. didn't want to come back to get my car. But I had to. You're in shock, just shock. You think about it all night."

A friend also said that Erin McGowan sent her text messages about the limousine. Melissa Healey shared the messages with the NY Times:

One friend said she got a text from one of the victims, Erin McGowan, telling her that a party bus that was supposed to pick up the group of friends to take them to a brewery had broken down on the way there.

Instead, the group obtained a stretch limousine, which was in shoddy condition, Ms. McGowan told her friend, using a profanity to describe the vehicle...

“The motor is making everyone deaf,” wrote Ms. McGowan, before Ms. Healey asked from where they rented the car.

Ms. McGowan responded that she wasn’t sure, but then added, “When we get to brewery we will all b deaf.”

They never made it.

Authorities have not released names of the victims yet, but it appears that many of the victims in the limo were related—some being newlyweds and new parents of children.

Barbara Douglas, aunt of four of the victims who were sisters, said, "One just got married, and that’s what this was — her new husband was giving her a surprise birthday party... They were beautiful girls, full of life. They had their whole lives ahead of them."

According to the Times Union, "Anthony Vertucci of Saratoga Springs confirmed to the Times Union that Amy Steenburg, her husband, Axel, his brother, Rich, and Amy's three sisters died in the accident. The group was celebrating a birthday. Vertucci said his niece, Erin McGowan, and her husband, Shane McGowan, were also in the limo and died in the crash. Relatives of the four sisters gathered at a house in Amsterdam Sunday night; two men outside the house declined to comment on the tragedy."

State Senate Majority Leader John J. Flanagan issued a statement Monday identifying one of the victims as State Senate employee Patrick Cushing. Flanagan's statement remembers Cushing as "an invaluable member of the Senate’s Technology Services unit based in Albany. He was an extraordinary employee and a wonderful young man who was loved by all."

The Times Union is compiling more information about the victims here.

The NTSB's "Go Team" arrived to Schoharie on Sunday morning. The deadliest incident prior to this crash was the 2009 plane crash in Buffalo that killed 50 (the duck boat sinking in Branson, Missouri this past summer had 17 fatalities). During a press conference, the State Police said that autopsies were being performed for all victims.

The Apple Barrel posted a Facebook message on Sunday, saying, "We are doing our best to cope and grieve. We are a big family at the Apple Barrel, and part of the bigger family of Schoharie. We cope by being together. And that is why we are open." The restaurant is also raising money for the local emergency services group.

#limo
#schoharie
#upstate crash
Do you know the scoop? Comment below or Send us a Tip