Sure, it was a little brisk last night, but that didn't stop one disgusting dude from wearing "crotchless nylons" and displaying his penis to L train subway passengers. Tipster Melissa Smith sent us distressing photographs of the pervert who was prowling around last night. WARNING: While the above picture might look like a guy who could possibly be wearing shorts under his parka, there's a very NSFW photograph below. We're not kidding—there is an extremely NSFW monster at the end of this book.

Smith tells us, "This guy was sitting across from me last night at 10:30 from Lorimer to 6th Ave. He was wearing crotchless nylons and opening and closing his legs to reveal his penis. I took photos (which he saw me do) and he confronted me when I got off at 6th Ave., hurled threatening epithets at me, and chased me out of the station. This man does NOT seem like a harmless perv." And here's that picture. Brace for impact. 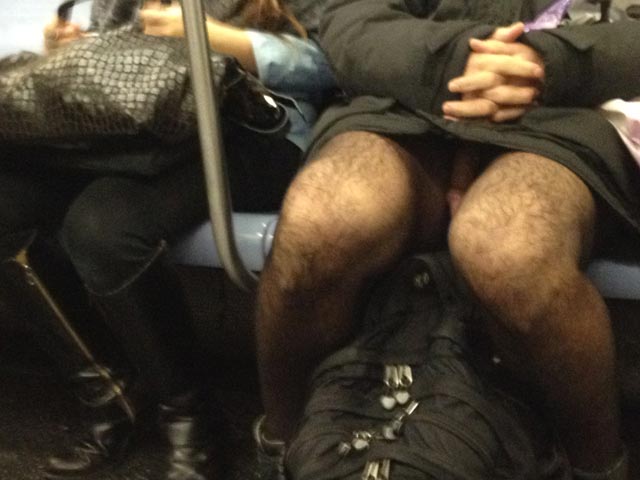 The train was about one-third full, according to Smith, and it didn't seem like other people noticed him ("if they did, they ignored him"). Smith, who is going to report the incident to the police today adds, "He was sitting across from me and even moved to be directly in front of me when the person next to him got off. Super creepy!"

#crotchless nylons
#gross
#l train
#pervert
#subway
#subway pervert
Do you know the scoop? Comment below or Send us a Tip