NSFW: Cops Didn't Think This Subway Rider With His Balls Hanging Out Was Breaking The Law

Earlier this year, the NYPD wanted everyone to know they are taking subway perverts very seriously by inviting the NY Times to tag along with plainclothes transit officers busting gropers. But when a 4 train rider noticed a man sitting on the subway bench this weekend with his testicles out in the open, the police said there was "nothing they could do."

WARNING: Extremely NSFW image of this ball hanger below. And now you know what's been on the subway seats before you.

Our tipster, a Manhattan resident, tells us:

On Sunday, at around 7:00 p.m. I encountered a flasher on the 4 train from Grand Central to Union Square. The man was wearing short jean shorts that he apparently cut so that he would be exposed when he sat down. He was sitting down with his testicles out, resting on the subway bench in full view. There were a fair number of passengers on the train, including women and children. 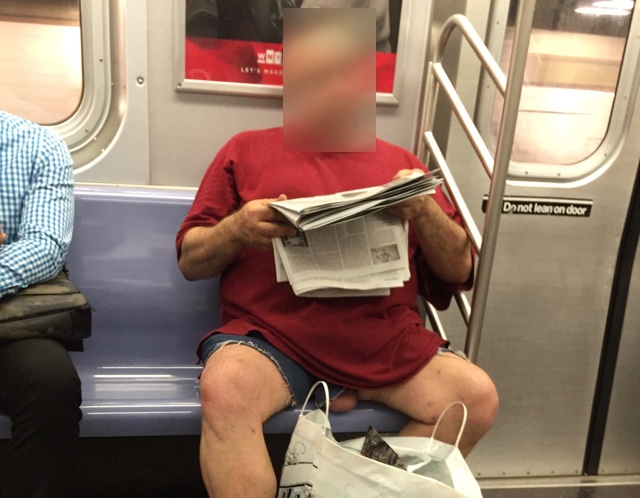 I photographed the man so I could report him to the police. He apparently noticed me taking pictures, and lowered his unusually baggy t-shirt to partially cover his exposed genitals while they remained out of his shorts. It could be inferred that he wore this long shirt so that he could cover himself when standing, and while seated if he chose.

NY Penal Law section 245.01 states, "Exposure of a person: A person is guilty of exposure if he appears in a public place in such a manner that the private or intimate parts of his body are unclothed or exposed. For purposes of this section, the private or intimate parts of a female person shall include that portion of the breast which is below the top of the areola. This section shall not apply to the breastfeeding of infants or to any person entertaining or performing in a play, exhibition, show or entertainment. Exposure of a person is a violation."

Our witness also speculates that the man in the photo "cut his shorts to permit the exposure," adding that NY Penal Law section 245.00, which is about public lewdness, says:

A person is guilty of public lewdness when he intentionally exposes the private or intimate parts of his body in a lewd manner or commits any other lewd act (a) in a public place, or (b) in private premises under circumstances in which he may readily be observed from either a public place or from other private premises, and with intent that he be so observed.

In an interview on Friday, NYPD Transit Bureau's Assistant Chief Vincent Coogan told us, "We take it seriously... The policy is we encourage the victims—or witnesses—to report any incidents. We want them to report it so we can take" the information and then assign it to investigators. If the victims or witnesses are at the station, he said, "We want them to report it to an officer: If they see the person still on the scene, we make an arrest immediately; if not, then the case will be investigated by either Manhattan Special Victims or our Transit Detective Squad in the other borough."

Even if the perpetrator is no longer there, Coogan told us the NYPD still wants victims and/or witnesses "to go up to the officer that’ll take the report. We have a witness statement that we take, we try to have the victim write the description of the incident out in their own words, right on the scene. That’s something relatively new that we do, so it’s fresh in their minds." The report is then forwarded to detectives; Coogan said, "A lot of pictures that are out there, whether it be on the news at night... or in newspapers"—or even websites—"that’s coming from our detective squad, or our Special Victims Unit." 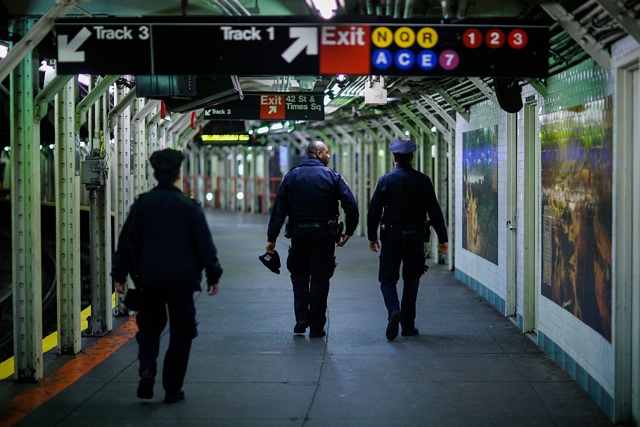 Sergeant Paul Grattan pointed out the NYPD "doubled down on this effort just over a year and a half ago" with help from the MTA, which created a website that allows people to file reports about sexual misconduct on the subways—there's even a place to upload photos or videos. "We get all of [the complaints]," Grattan said, "regardless of how much or how little information is put through there, and we’re able to, if the complainant does wish to provide their information, we’re able to contact them. More importantly, if the complainant doesn’t want to provide their contact information, which is obviously not ideal, we can at least track the fact that something likely happened, and we can monitor for trends. They might be speaking about a location where we're having problems."

The NYPD Transit Bureau is proud of the progress they've made: Yes, there has been an increase in reported subway sex crimes, but Chief Coogan interprets that as a good result from "all the effort we’re putting into trying to get it out there that we want women to come forward with their complaints. We want to catch these people that do this. And we do catch a lot of people. Of the complaints we have for this year, 53.4% have arrests on them. Compared to a lot of crimes that have happened, that’s a very high arrest ratio."

Many arrests come from the plainclothes Transit Bureau teams, who witness the crimes and make arrests on the spot. However, since there are numerous incidents that occur outside Manhattan and the major commuting hubs, that's "all the more reason that even the complaints that come through the MTA portal are of value to us," Grattan said.

Police officers undergo "frequent" training on working with victims and witnesses of subway sexual misconduct, the Transit Bureau says, citing "daily training in precincts or transit districts" as well as new officers being trained by veteran officers. As for the MTA workers or police officers who might decline to take reports, Coogan urges victims and witnesses to get their names and report them.

Coogan and Grattan strongly deny that some officers may be brushing off victims or witnesses in order to avoid filing reports and keep crime statistics down.

"I have two daughters, a wife, and my mother’s passed but they all take the [subway]," Coogan said. "My mother took it to work every night, she worked as a cleaning lady in Rockefeller Center and took the train home at 11:30 at night. And that was back when the trains were a lot worse. So believe me, we don’t want these" subway perverts "riding the trains doing this... We do everything we can to catch these people, and it shows by the numbers."

Please report subway misconduct: This includes seeing a masturbator, being groped, being grinded on, etc.). Ideally all police officers would be ready and willing to assist victims, but sometimes that doesn't work; you can report it to the MTA and police on this website. Don't let the perverts win, and don't let some cops sweep it under the rug.

#indecent exposure
#nypd
#public lewdness
#subway
#original
Do you know the scoop? Comment below or Send us a Tip