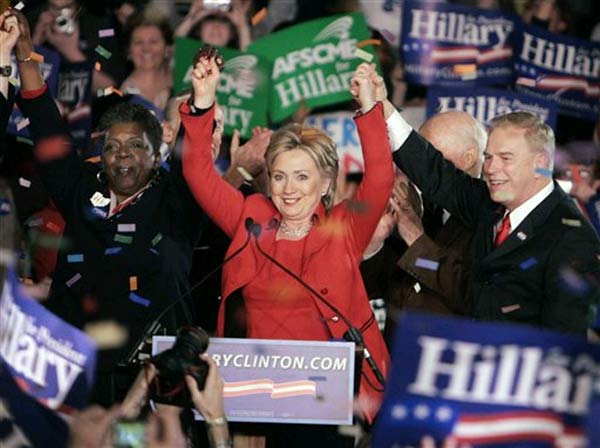 Photograph of Clinton, holding the hands of Rep. Stephanie Tubbs Jones and Ohio Gov. Ted Strickland and celebrating in Ohio, by Mark Duncan/AP

Fresh off her big night of wins in Ohio and Texas, Hillary Clinton spoke on CBS's Early Show and mentioned the words "dream ticket" in relation to the heated Democratic presidential race. Harry Smith told Clinton, "We talked to a lot of people in Ohio who said there really isn't that significant a difference between you two, and they'd like to see you both on the ticket." After remarking how "incredibly close" the race is, she said pairing up "may be where this is headed, but we have to decide who is on the top of the ticket, and I think that the people of Ohio very clearly said that it should be me."

Of course, Barack Obama, who thinks talking about a joint ticket is "premature," told the Early Show, "We still have close to an insurmountable lead in delegates." And the Daily News' Errol Louis thinks a Dream Team ticket is more like a nightmare for a number of reasons, the greatest being "both Clinton and Obama are skimpy on diplomatic and military experience."

As for why Clinton won, some suggest attacking Obama worked, dooming the rest of America to be subject to a nasty fight between both campaigns for the remaining primaries. And it's possible Clinton's victories actually cause more problems for herself and the Democratic Party. The NY Times says "simple math is still her enemy" and Newsweek suggests even with superdelegates and Florida and Michigan votes, Clinton can't cinch the nomination. The Post's Charles Hurt calls her the "Strife of the Party," pointing out that if she demands Florida delegates to be counted, it'll make Republicans thrilled.

Politico has good write-ups about exit polls in Texas and Ohio - one big factor was white male voters.