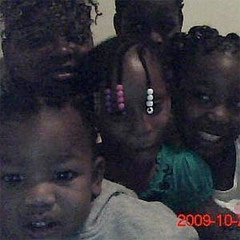 Family photograph, via the Post: "CJ, 14, peers out from behind his family, whom he slaughtered: (from left) brother Jermaine, mom Leisa, and sisters Melanie and Brittany"

The heartbreaking news that mother and her four children died after a fatal fire in their Staten Island home early Thursday morning turned haunting when authorities suggested the 14-year-old son slashed the throats of two siblings and then set fire to their apartment. Now, the tragic story seems to grow, as law enforcement says a charred note saying "am sorry" was found stuck to a butane lighter.

According to the Staten Island Advance, "The note appears to have been handwritten with a ballpoint pen, and also included the words 'you,' 'me,' 'that,' 'at' and 'I.'" Police spokesman Paul Browne said, "We haven’t made any determination whether this note has any significance concerning the crime," but handwriting experts will be comparing the handwriting to the work of C.J. Jones.

C.J., 14, is suspected of slashing the throats of his sisters, 7-year-old Melanie and 10-year-old Brittney, and then setting fire to the apartment. His two-year-old brother Jermaine died of smoke inhalation; his, Melanie's, and Brittney's deaths have been ruled homicides. An autopsy is still being conducted on his mother, Leisa Jones, as is one on C.J. himself, who was found with a slashed throat and a straight razor under him.

While neighbors and relatives remembered him as a responsible, serious boy who cared for his siblings, some say that C.J. had psychological issues. The Post reports, "CJ had been on "superintendent's suspension" from Intermediate School 72 for the past three months after getting into verbal disputes with teachers -- some of whom he physically threatened -- and shoving an assistant principal. School officials talked to his mother about placing him in the District 75 special-ed program -- which handles students suffering from the most severe learning disabilities and emotional, behavioral and medical issues." Apparently Jones agreed, but did not tell her family.

Jones' sister Sharon Scott told the NY Times, "Where we come from, we keep trouble to ourselves and try to find a way to fix it." The Times reports, "Some classmates said that [C.J.] was taunted as a bum because he often wore the same clothes, and that students picked fights with him for no apparent reason." And C.J. was spotted starting small fires, including one at a public pool. He was also partially blind in one eye, from an injury in Jamaica, where he was born and had lived until six years ago, when his mother sent for him (she had left for the U.S. when he was a baby).

The Times also describes how Leisa Jones had financial problems:

The landlord of the building in Washington where she last lived before leaving for New York had started eviction proceedings against her for nonpayment of rent.

Before moving into her rent-subsidized apartment on Staten Island, Ms. Jones and her family lived for several months in a homeless shelter, relatives and neighbors said.

Ms. Jones worked as a part-time security guard and braided hair on the side to make extra money, but she continued struggling to make ends meet. She again fell behind on the rent, so her Staten Island landlord started eviction procedures against her in February. By the time she died, though, the debt had been settled, a city official said.

There were times when Ms. Jones fed her children food that neighbors had given her. Once, a neighbor recalled, Ms. Jones divided a gyro sandwich in fourths to make a meal for her and her three oldest children. “If you offered, she would take it, but she never asked anyone for anything,” Ms. Fleming said.

Scott, Jones' sister, was adamant that her nephew was innocent, "If the police are trying to say that my 14-year-old nephew is this mass murderer because they found a scrap of paper with two words on it, then we have a big problem."

#CJ jones
#fatal fire
#fire
#Leisa Jones
#murder-suicide
#staten island
#tragedy
Do you know the scoop? Comment below or Send us a Tip