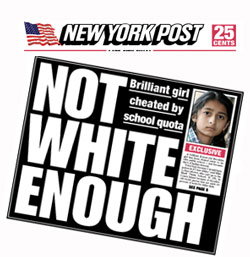 A lesson in quotas and school bureaucracy for an 11-year-old: The Post reoprts that Nikita Rau was denied a place at a magnet school because she's not white. Rau and her parents hoped she would attend Mark Twain School - IS 239, a magnet school in Coney Island (recently reported to have the best Math and English scores for Level 4 students) but a 33-year-old federal ruling is preventing her entry.

The quotas for the school, set in 1974 for desegregation, are 40% minority and 60% white (IS 227 in Queens is the only other NYC public school that also operates under the order). From the Post:

When Nikita recently applied to Mark Twain, she took an admission test geared toward music students and scored a 79.

In May, the Education Department sent her parents a letter that said Nikita was not accepted - even though white students who scored lower on the same test were admitted.

Officials told the Raus that because Nikita is classified as a minority, she would need to score at least 84.4 to be accepted, while white students needed to score 77 or more.

Nikita's father Dr. Anjan Rau railed, "This country believes in racial equality, and we should not face this in America. I think it's morally wrong! She's American born, and she's a U.S. citizen, and [her parents] are both U.S. citizens, but that doesn't count." And he added, "It could hurt her chances of going to Harvard, Yale or Princeton."

The Department of Education said, "Although we strive to make our enrollment process as equitable as possible, we must comply with the federal court order." The Raus' lawyer wrote a letter to the DOE, "The unconstitutional rejection of my client constitutes discrimination." The Post reports that after they started to inquire about the issue, the DOE offered Nikita a place at "IS 98, the Bay Academy, another Coney Island school for the gifted, albeit one less competitive than Mark Twain."

We wonder what Twain would have made of this.