'Not A Lot Of Happiness': Here's What Made It Into The State Budget (And What Didn't)

Governor Andrew Cuomo and state lawmakers have passed a finalized budget, capping off a week of tense negotiations, frantic lobbying efforts, and Dadaist deconstructions on the meaning of time with a sunrise vote earlier this morning. The resulting $175 billion deal, the largest in state history, is the first-ever budget brokered by Cuomo alongside a unified legislature (and also, we're pretty sure, the first agreement ever to feature a top gubernatorial aide referring to fellow Democrats as "fucking idiots.")

Thus far, the reaction in Albany to the wide-ranging budget agreement has been largely mixed. Cuomo, who is now poised to become the country's highest paid governor, said the deal represents "the strongest progressive statement that we've made." Democratic Assembly Speaker Carl Heastie, meanwhile, is freely admitting "this is not a great budget" and noting there's "not a lot of happiness" inside the agreement.

As the dust settles on another year's budget bonanza, we too are still figuring out what exactly the sprawling plan will mean for New Yorkers. Will this subtle shift in traffic oversight give suburbanites power over city streets forever? Did Cuomo just seize control of an obscure public authorities board to exact his revenge on Amazon dissenters? How much money did the state pull from assistance programs impacting low-income NYC residents? (De Blasio says $125 million; Cuomo’s team hasn’t responded.)

We'll be keeping an eye on those developments in the days to come. In the meantime, a brief overview of what's in — and what's out — of the fiscal year 2020 budget.

Marijuana: For a brief moment there, it looked like New York would join at least ten other states across the nation in legalizing marijuana for adults 21 and older. But the fragile consensus fractured in recent days, and the priority ultimately didn't make it into the budget, thanks to legislative infighting about how the drug should be taxed, who should be allowed to sell it, and where the money should go.

Over the weekend, advocates expressed frustration about the "unmet promises and empty rhetoric" from vocally pro-pot legislators in Albany. "Each day marijuana legalization is not passed, someone is arrested, deported, evicted or loses custody of a child because of criminalization," Kassandra Frederique, the New York director of the Drug Policy Alliance, said in a statement. "Each day that New York's leaders maintain prohibition, someone can't pass a background check, has their parole revoked, or loses a job."

While not in the budget deal, the governor says he's hopeful that state lawmakers can reach a framework for legalization before the legislative session ends in June. 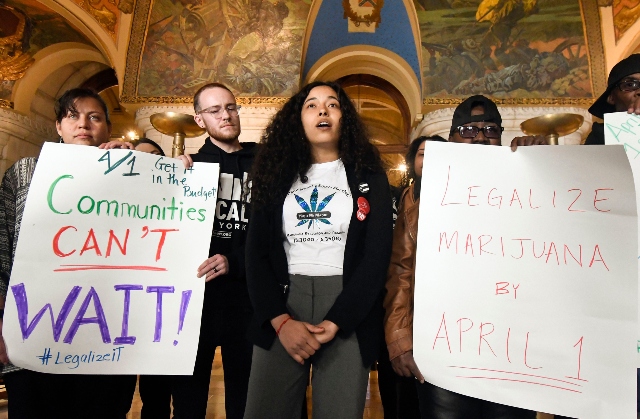 Congestion Pricing: After decades of failed attempts, New York City is finally getting congestion pricing. The first-in-the-nation plan, based on last year's Fix NYC panel, will charge drivers between $10 to $15 to enter Manhattan below 60th Street (with the FDR exempt) starting by December of next year. The tax is expected to collect $1 billion annually, which the state could then use to generate $15 billion in bonds. Eighty percent of that revenue will help go toward fixing the city's buses and subways, while Metro-North and the Long Island Rail Road will each get a 10 percent chunk.

Debates over who should be exempt from this toll — a sticking point for some legislators, as well as Mayor Bill de Blasio — and other details will be hashed out by a new traffic mobility board, whose members will be appointed by the MTA. Already, some transit experts are raising concerns that the bill's language would effectively give the state-run transit authority control of the city streets, with decisions unduly influenced by suburban legislators and other congestion pricing foes.

Still, even if some of the thornier details have yet to be worked out, transit advocates are celebrating the news.

"After decades of neglect and inaction, riders spoke up in unprecedented numbers to secure the largest transit funding plan in a generation," said John Raskin, executive director of the Riders Alliance. "The billions of dollars raised through congestion pricing and other new revenue sources will help modernize the MTA with new train signals, new subway cars, and faster and more reliable bus service."

Public Financing of Campaigns: Despite growing momentum and the ostensible support of Governor Cuomo and the State Senate, the new budget will not create a system for publicly financed campaigns. Instead, the deal calls for a commission to study the issue, and to deliver recommendations on how the ratio of matching funds should be configured (advocates say that it has to be a 6:1 proportion to be effective).

Good government groups and progressive lawmakers, who have long seen the reform as a way to reduce the impact of big money on elections, immediately decried the commission as a punt. Newly-elected State Senator Jessica Ramos called the decision "shameful," while Common Cause described it as a "ploy to remove power from the Legislature."

The Cuomo way is to create commissions for things he doesn't want. It is totally unacceptable--we have extraordinary hunger for real reform, and New Yorkers live every day with the cost of millionaire-funded/run elections: inequality, poverty, homelessness, pollution.

Rent Reforms: Like marijuana, the push for renewing and reforming rent regulations was not addressed in the state budget, and is expected to take a front and center role in the upcoming legislative session. From the rollback of Giuliani-era loopholes to a set of protections touted as "universal rent control," housing advocates are pushing major changes to rent laws, and coming up against a powerful real-estate lobby that's long stifled change.

Criminal Justice Reform: Lawmakers are set to approve a slate of bills aimed at transforming the discovery process, ensuring the right to a speedy trial, and eliminating cash bail for misdemeanors and non-violent felonies. But despite an initial press release from the Governor's Office declaring that cash bail has been fully eliminated, exemptions remain, including for cases involving violent felonies, Class A felonies, and a handful of other charges.

"We did not handle the violent felonies," Cuomo told reporters on Sunday. "That's something we're going to continue to work on."

The partial bail ban comes four years after the suicide of Kalief Browder, who spent his teenage years on Rikers Island for a petty robbery charge, and later became the face of the growing movement to end cash bail. The new statute is expected to eliminate cash bail in approximately 90 percent of cases.

Education Funding: The budget includes $1 billion increase in state education spending, with about $618 million of that going toward what's known as "foundation aid" for struggling districts. Members of the Assembly had asked for about double that, while Governor Cuomo had proposed $338 million increase. The district-by-district allocations have not yet been disclosed.

Education folks note that a difference between $338 and $618 is not necessarily that much in additional funds, but primarily shuffling them from the $157 million fiscal stabilization fund and a decrease in expense based aid estimates. https://t.co/kopj6YnX86

Following an inspired lobbying effort from the real-estate industry, lawmakers pulled the plug on the pied-à-terre tax over the weekend, instead opting for two one-time taxes that some experts worry will subject the city's transit funding to a more unreliable revenue source. The current plan will slightly expand the "mansion tax," and raise the state transfer tax to 0.65% from 0.4% for properties that sell for more than $3 million.

While the pied-à-terre tax was believed to have generated a higher and more consistent stream of revenue, legislators — parroting lobbyists — claimed it would have been too difficult to administer. But James Parrott, director of economic and fiscal policies at the Center for New York City Affairs and the man who wrote the proposal on which the tax bill was based, told us earlier today that justification doesn't hold up to scrutiny, as the state has been differentiating between primary and part-time owners for years.

"It's disappointing to see arguments as dubious as they are prevail," he said. (More on the death of pied-à-terre, and its volatile replacement, here).

Property Tax Cap: Cuomo's number one budget priority, and the top line in his budget announcement, is an agreement to permanently implement a 2 percent property tax cap. This cap has existed for years — though localities can vote to override it — but the governor has said codifying it as permanent could add "stability" at a time when Albany is facing a state income tax revenue shortfall and Washington has steeply curtailed the deductability of state and local taxes, or SALT.

Plastic Bags: Less than two years after Cuomo and the State Senate intervened to stop a citywide plastic bag ban, New York now finds itself poised to become the second state in the nation to implement an outright ban on single-use plastic bags. The legislation will include several carve outs, including for restaurant takeout bags and meat counter products, and notably will not be coupled by a fee on paper bags, as environmental advocates had called for. The budget bill does allow counties to implement a 5-cent fee for paper bags, which environmentalists say is crucial to changing consumer behavior.

"Experience elsewhere has shown that a simple ban on plastic bags leads to much greater use of paper bags—or thicker plastic bags—and doesn't accomplish the primary objective of triggering a shift to reusables," Eric Goldstein, NYC Environment Director for the NRDC, told us last year.

The ban is expected to go into effect in March 2020.

#Albany
#budget
#fy 2020
#governor cuomo
#state assembly
#state senate
#original
Do you know the scoop? Comment below or Send us a Tip