Not a Complainer: Lady who Waited Hour for Ambulance 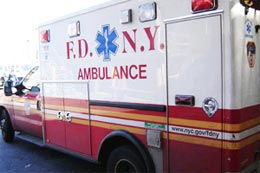 Yesterday, it was reported it took 51 minutes for an ambulance to respond to a 911 call about an 88-year-old woman who fell at East 55th Street and Lexington Avenue because the ambulance had been dispatched to Manhattan from Staten Island.

The incident outraged the FDNY (which is conducting an internal investigation), Public Advocate Betsy Gotbaum, a witness who helped the lady--pretty much everyone except the fall victim herself! The Daily News contacted the woman, who was apparently "jostled," falling to the "hard pavement, injuring her head and back." She said, "There are two kinds of people, the complainers and the noncomplainers. I'm not one of those to complain."

And when the News told her why the ambulance took so long, she said, "Oh, goodness. Mistakes happen, even in the computer age." Aw, classy and cute! But WCBS 2 followed up and found that there can be very long waits for emergency responders. On Tuesday--which was the hottest day of the heat wave--some people's waits from 45 minutes (a woman with a broken leg) to almost two hours (a teen with a foot injury); critics say staff shortages and low pay are causing these problems.

#ambulance
#emergency responder
#emergency response time
#fdny
#waiting
Do you know the scoop? Comment below or Send us a Tip
A new Gothamist is coming! We’ve moved comments over to our beta site. Click here to join the conversation and get a preview of our new website.