Staten Island Community Board 1 members and North Shore residents came together on Monday night in the waterfront town of Clifton to hear the city officials give their final recommendations on the North Shore Transportation Improvement Strategy.

Staten Island's North Shore has long been plagued by traffic jams, which have grown increasingly paralyzing as waterside development booms and the population grows. The city has a number of projects in the pipeline, including the mixed-use complex at Lighthouse Point, a new recreational waterfront in Stapleton, and the New York Wheel ferris wheel and Empire Outlets mall project on the St. George waterfront.

The report from the NYC Department of Transportation and the Economic Development Corporation outlined the increase in traffic that Staten Island will see over the next decade due to these forthcoming tourist attractions. It also offered some strategies to mitigate the growing burden of cars, bikes, pedestrians, and ferries in what Transportation Chair Nicholas Zvengintzov referred to as the "walled city" of the North Shore, a reference to I-278, which divides the North Shore from the rest of the island.

Zvengintzov observed that traffic snarls stem from the unique mix of transportation needs in the area: while many on the North Shore itself are concerned with getting around and being able to park in their neighborhood, the rest of the island is focused on getting to and through the area for commuting purposes. Since Mayor Giuliani eliminated the fare on the Staten Island Ferry in 1997 under the "One City, One Fare" initiative, it has become an overwhelming magnet for commuters, with all roads, buses, and trains leading to St. George.

Many attendees said current infrastructure is insufficient to deal with demand. "The patterns are outdated and a lot of the buses end at the ferry, but many people are going past the ferry," said Tiffany-Ann Taylor, a project manager at the EDC.

The DOT's final report estimates that the major waterfront projects will generate a lot of tourist traffic—around 49,000 new daily trips during the week, and nearly 59,000 new daily trips on the weekend. The ferry system, not the roads, will bear the brunt (an estimated 73 percent) of these new trips, since most visitors will be tourists or shoppers coming from Manhattan's Whitehall-South Ferry Terminal. 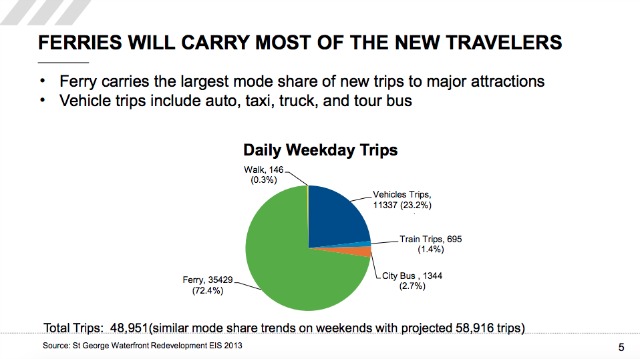 The ferry system will bear the brunt of tourist trips to the new North Shore attractions. (via EDC)

But that still leaves an extra 11,000 or so new daily weekday car trips through the already-congested neighborhood.

The final report builds on traffic mitigation plans first outlined in a 2013 environmental impact study on waterfront development in the area. It incorporates the 2013 proposals for increased traffic enforcement and some roadway changes, but also stresses managing travel demand.

"It's an opportunity to encourage folks to consider using alternate transportation, or at least integrate more of it into their daily lives," Taylor explained.

She said diversification of transportation modes is key to solving the North Shore's traffic problems. Options suggested for incentivizing public transportation include making it faster (with more buses and transit signal priority), cheaper (lower fares), and more reliable (better scheduling information). On the flip side, the officials could disincentivize the use of private automobiles with policies like variable-price parking near attractions.

Community members latched onto this idea, with many voices calling for park-and-rides and decreased fares on the express bus. The MTA did not reply to a request for comment on increased bus service or cheaper fares by press time. However, given that fares are going up across the board in 2017, the possibility of decreasing fares on the express bus seems like a long shot.

While some cited the prohibitive cost for lower-income residents of the express buses, Community Board 1 member Bob Zion said officials shouldn’t underrate the hassle of a slow commute. "There's a cost in time for the ferry!" he exclaimed.

Zion echoed many of the other attendees in expressing a concern that the plan lacked focus. "In a war, these are the implementations, the troop movements," argued Zion. "But above that, there must be a strategic objective, a long-range, grandiose approach that we can use to set our goals."

But Emma Pfohman, community liaison from the EDC, defended the proposal, arguing that a simple proposal wouldn’t cut it. ”It's hard to have an easy one-liner, one-size-fits-all for Staten Island," she said.

"The goal is to keep Staten Island from drowning in vehicular traffic," Pfohman said. The room grimaced.