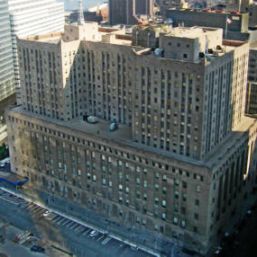 Another noose was found Thursday afternoon - and this time, it was outside the Church Street Post Office. Um, WTF is going on?

The noose was found on a lamppost, and while it was visible at street level, postal employees working on the second floor noticed it. Building management took it down. According to Newsday, there is scaffolding outside the building at 90 Church Street that "leads to the light pole, but the scaffolding is covered with barbed wire."

The building is shared by the USPS, the city's Housing Authority, state agencies and other tenants. The NYPD, FBI and Justice Department are investigating. USPS spokesman Al Weissman said no other threats were known, "At this point, there was no target that was evident or any motive."

This comes as police are investigating a noose found outside a Columbia professor's door - and as there have been other noose incidents nearby, in New London, at the Coast Guard Academy, and in Hempstead at a police department locker room.