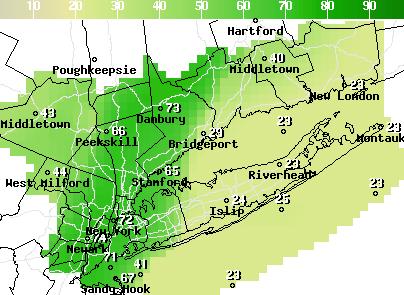 One reason for the unpredictability of a hurricane is that the storm gets big enough to perturb its surrounding environment. When that happens you get a contest of equals in the atmosphere, the tropical system can start to deform the atmospheric around it, and the outcome is uncertain. That didn't happen with relatively weak Tropical Depression Gabrielle. She briefly intensified to tropical storm status, but weakening after touching the Carolina coast she never had the oomph to compete with the rest of the atmosphere. Now she is being squeezed out to sea by a high pressure system over the mid-Atlantic and a weak cold front along the east coast. At best the beaches will sea a bit of rough surf and riptides.

Of more concern to the New York region is the weak front that is just to the north and west of the city. It's the same story we've seen over and over this summer. A frontal boundary combined with lots of humidity adds up to a chance of showers or a thunderstorm. Intermittent rain showers are likely through tomorrow night. An umbrella is your friend! The chance of showers is greatest tomorrow afternoon and evening. It won't cool off much tonight, but it won't warm up much tomorrow either. High tomorrow around 77.

Once the nearby weak front and the stronger trailing front finally chase the rain out of here we will have several days of cooler and dryer weather. Highs on Wednesday should be in the mid-70s. Thursday will start off cool, low around 58, and only warm to the lower 70s. Friday will be a bit warmer.

Probability of precipitation through 8:00 p.m. this evening from the National Weather Service.