Noble Cause or Losing Battle: Trying to Keep the Subways Less Stinky 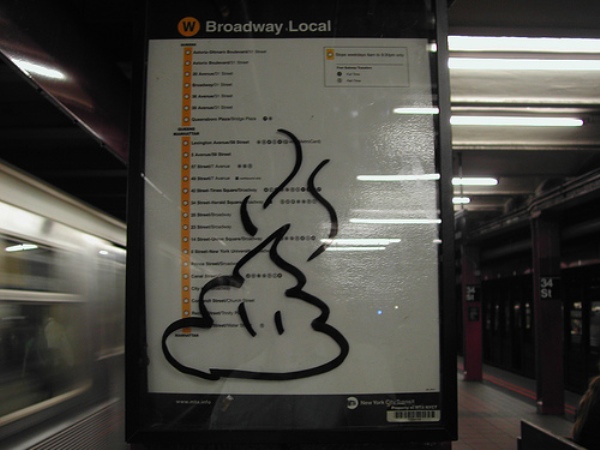 amNewYork's cover story, "Grand Funk Railroad," takes a look at the special scent of subway stations. Subway smells were vividly described as being "rancid excrement" or "rotting garbage and vomit." Smelly subway platforms - and trains - are nothing new, but the New York City Transit Authority is adding 350 more cleaners to help fight the grossness; amNY reports the cleaners will "be able to respond to specific stenches faster."

Bill Henderson, head MTA's Permanent Citizens Advisory Council, explained that Herald Square's station smells bad because "sometimes the cause is a broken sewer line. It could also be something on the surface." Hmm, blaming non-MTA forces, how unexpected. Of course, this reminds us of the broken MTA sump pump at the East 51st 6 train station in Manhattan two years ago - the smell was reminiscent of "backed-up bathroom" meets "dead body."

Disabled Riders Coalition spokesman Michael Harris suggests that elevators, which are often smelly, be lined with aluminum, because wood and linoleum trap odors. He also tells amNY that smells better suited to bathrooms could be eliminated with more police and scrubbing. That's probably true, but we think it's a losing battle: For every new cleaner the MTA hires, there are probably twenty more people who will pee on the platform.