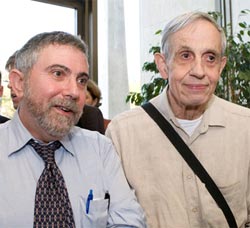 Paul Krugman, who won this year's Nobel Prize for economics, told CNBC that the Treasury Department's move to inject banks with $250 billion is better than the original bailout plan. He said, "In the last six days this thing has come together with a plan that really does address the critical problem of inadequate capital at the banks (and) addresses the need for guarantees to calm the markets down. We don’t know this is going to work, I wish we were sure, but this is a much better. For the first time I’m starting to feel that policy is really getting some traction on the crisis.”

The NY Time op-ed columnist also explained that the government needed to intervene, "This is not a case for socialism, it’s a case for regulation, oversight and for government-led rescues when there’s an emergency. We’re not going to go back to Karl Marx, but we are going to rediscover some of the things Franklin Roosevelt learned 75 years ago.”

As for his win, Krugman was skeptical when he got the call from the Nobel prize committee, "My immediate conclusion was that was an obviously fake Swedish accent." Princeton University, where Krugman is a professor at the Department of Economics and in the Woodrow Wilson School of Public and International Affairs, feted him yesterday--and John Nash, retired Princeton mathematician, winner of the 1994 Nobel Prize in economics, and Hollywood biopic subject, was on hand to help celebrate (pictured).