No Touching Rule At Rikers Will "Dehumanize" Inmates, Advocates Warn

Xena Grandichelli, a trans woman, spent four months at Rikers Island in the men's jails. There, she was physically attacked and sexually assaulted. Staff then placed her in protective custody, which amounted to being locked in a solitary cell 23 and a half hours a day. But what broke her, she recalled, was being denied a visit with her sister.

"The only thing we have from the outside world is our family," Grandichelli said. "When they take that away, it dehumanizes and breaks you."

Grandichelli filed an appeal, challenging the denial. She won, but it was one month before she was allowed to see her sister again. Meanwhile, she became depressed. "I went in with no history of mental health [issues]," she remembered. "But I came out with major depression. I had to be on medication." She was released in January 2015 after all charges against her were dropped. Today, she still needs medication to control her depression.

Grandichelli is now an intern at the Sylvia Rivera Law Project, an organization that works with trans and gender non-conforming people in New York City. On Friday, she was one of 40 people who showed up to an auditorium across the street from Bellevue Hospital to testify against the proposed rule change [PDF] being considered by the Board of Correction, which sets minimum standards and guidelines for the city's jail system, including Rikers Island.

The proposed rule would allow the Department of Correction to deny visitors based on family relationship and/or past criminal convictions as well as drastically limit physical contact during visits. The denial can be appealed, but a decision may take up to fourteen business days.

The rule change would affect the 10,000 people held at Rikers Island each day. Approximately 85 percent are awaiting trial, as in Grandichelli's case. Although absent from Friday's hearing, Joseph Ponte, Commissioner of the New York City Department of Correction, has stated at previous meetings [PDF] that the rule change is necessary to help reduce violence at Rikers.

Grandichelli wasn't the only speaker who had spent time at Rikers. Barry Campbell is now the assistant to the CEO of the Fortune Society, which works with people returning to New York City from jails and prisons.

"Ninety percent of people who come out of Rikers are angry," he said. Recalling his own time on the island, he told Gothamist, "It's like a pressure valve. I had a lot of pent-up anger. You're always on alert, always in protective mode. But on a visit, I can be human. I can touch, feel, show emotions."

He also remembered that men who were not allowed physical contact during visits left the visiting room even angrier. That anger—and the behaviors from prison—accompany the person upon their return to their community. "If the new rule goes through, people will be coming home even angrier."

In December, when the Board of Correction held a public hearing about a proposed rule that would both create the Enhanced Supervision Housing Unit and limit time spent in segregation, the Department of Correction filled half the auditorium with nearly 60 uniformed correctional officers, DOC commissioner Joseph Ponte and Correction Officers' Benevolent Association president Norman Seabrook. All were absent from Friday's hearing.

At Friday’s meeting, board member Bobby Cohen noted that he was disappointed by Commissioner Ponte’s absence and was quickly rebuked by the board’s chair, Stan Brezenoff, who called his comment "gratuitous."

The DOC directed Gothamist to the City Hall press office for comment; the Mayor's Office has not yet responded. COBA has yet to provide us with a comment. 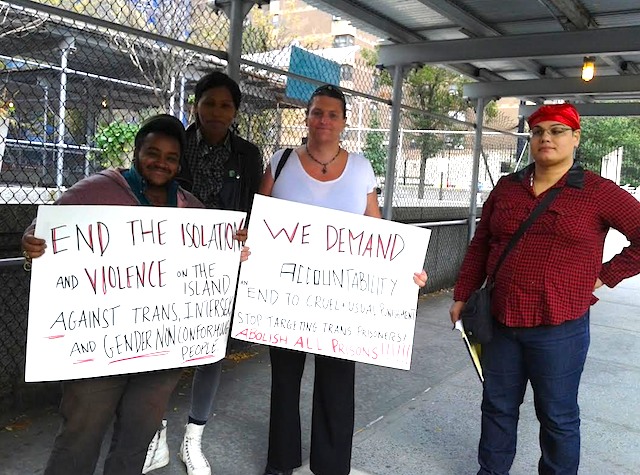 From right: India Rodriguez, Xena Grandichelli and members of Sylvia Rivera Law Project outside the Board of Correction hearing (Victoria Law / Gothamist)

Candie Hailey-Means tried to kill herself numerous times during her four years at Rikers. Each time, officers wrote her a disciplinary ticket; for each ticket, she spent 30 days in segregation. "I got over 100 tickets because I cut myself over 100 times," she recalled. Hailey-Means spent over three years in isolation.

Her sister's weekly visits were her only contact with the outside world. "I got to hug somebody. I knew somebody cared," she said. Otherwise, she recalled, "You're in a box by yourself. You have no contact with the outside world." Had it not been for those visits, she said, "I would have tried to kill myself even more." Hailey-Means was acquitted of all criminal charges and released from Rikers on May 1, 2015.

But, she added during her testimony, limiting contact during visits would not stem the flow of contraband onto the island. She recalled an officer drinking on the job—and offering her a drink as well. "That officer is still employed at Rikers."

Johnny Perez, who spent a year and a half at Rikers Island, also challenged the Department's argument that limiting contact and restricting visitors would decrease the flow of contraband at Rikers. "I can't tell you how many times I bought drugs from COs who threatened to beat me up if I didn't pay them on time," he said.

In contrast, visits with his mother reminded him that, despite his incarceration, he was still a son to his mother and a father to his daughter. "The only thing that kept me sane was the connection with my family. Being able to hold your daughter or kiss your mother makes a difference."

Jennifer J. Parish, the director of criminal justice advocacy at the Urban Justice Center and a member of the Jails Action Coalition, noted that the Department has instituted searches of jail staff, resulting in arrests and even prison sentences of staff for smuggling contraband. Instead of acting on the proposed rule change, Parish urged the Board of Correction to allow these searches of staff members to continue and see if the rates of drugs, weapons and other contraband decrease during the next six months. 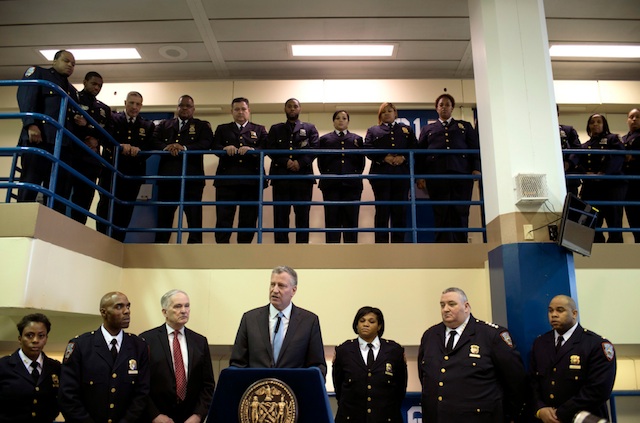 The proposed rule change allows the Department of Correction to waive the seven-day break and, if staff determine that the person may endanger others, keep that person in segregation past the 60 day limit.

"Today I am free, but I struggle daily with insurmountable emotional traumas," she testified through tears before the Board. "I stand before you today to ask you to abolish solitary confinement. This is a civilized society and it must end."

Few family members made it to the hearing. Some sent statements, which were read by advocates. But Chanel, whose sister has been at Rikers since Labor Day, rushed into the auditorium after work to talk about the importance of visiting—and being able to touch.

The Board of Correction will vote on the proposed rule change on Tuesday, November 10th.

UPDATE: Monica Klein, a spokesperson for the Mayor's Office, emailed us this statement:

Each of DOC's rule changes is aimed at reducing violence associated with contraband coming into the jails and providing the necessary flexibility to manage a small population of very violent offenders. The goals of the visitation policy is to provide a common-sense approach that reduces drugs, weapons and other contraband from entering the jails while respecting our inmates’ legitimate needs to maintain ties with family members and the community. The department remains at the forefront of national jail reform efforts, thanks to Commissioner Ponte's plan to remove all inmates age 21 and under from punitive segregation.

#coba
#doc
#Rikers Island
#longform
#original
Do you know the scoop? Comment below or Send us a Tip