Regis, who declined to give her husband's name or details of his case for fear of retaliation by staff, also knows firsthand how important touch can be. In early 2015, she spent five months at Rikers for shoplifting. Her husband visited twice a week.

"The intimacy from a loved one means a lot," she explained. "They're showing me—I'm here for your support. I love you still, no matter how it is."

But new rules proposed by the Board of Correction, which sets minimum standards and guidelines for the city's jail system, may soon limit the couple's ability to touch each other.

Under the proposed rules, visitors will be limited to a brief hug and kiss at the beginning and end of each visit. They may be allowed to hold hands, but over a six-inch partition. Other contact will be restricted. Young children will still be allowed to sit on their parents' lap, but children over the age of nine will have to stay in their own chair.

DOC Commissioner Joseph Ponte argues that these changes would reduce the number of weapons and other contraband brought into the jail by visitors, contradicting the Board of Correction's own findings that of the 2,100 weapons found in 2014, only 4.2% (or 88), were found in the visiting area. It also contradicts repeated reports pointing to jail staff as the most consistent purveyors of contraband.

"The Department already has the ability to place people with histories of violence or contraband in booth visits [visits that do not allow any contact]," says Tanya Krupat, the program director of the Osborne Association's New York Initiative for Children of Incarcerated Parents.

"It also has the ability to deny visits altogether if contraband has been found. There is no evidence that the proposed changes will reduce violence, and certainty that they will delay and discourage visits, and stigmatize visitors."

The proposed changes will also allow the DOC to deny visitors based on their relationship, their probation or parole status, the nature of either person's felony convictions, and/or the person's pending criminal charges. The denial can be appealed, but a decision may take up to fourteen business days, meaning that a person may wait three weeks to see their loved ones. 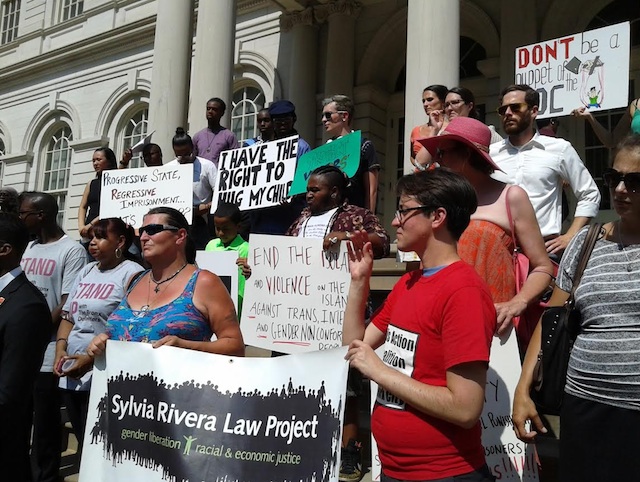 For Anthony Collado, who spent one year at Rikers awaiting trial for murder, touch has always been his family's way of communicating.

"Body contact communicates way more, especially for people who aren't used to talking," explained Collado, who was visited by his girlfriend, friends, and 86-year-old grandmother. "A lot can be communicated through holding each other's hand or rubbing each other's face. That's a whole level of communication by itself."

These visits, he said, showed him "that somebody still cares about you and wants you to do something different with your life. They want you to be better. They want you to do better." He also noted that visits, and the ability to touch loved ones, counter the negative influences within the jail.

"These visits are a chance to balance that out, and have something competing in your mind as to what kinds of decisions you're going to make. When you're in a vulnerable position, all that [contact] counts. A hand touch, wiping your face, it matters."

Collado, who ultimately pled guilty to manslaughter and was sentenced to fifteen years in state prison, pointed out that "the majority of people in Rikers are not going to spend the rest of their lives in prison."

Approximately 85 percent of the 10,000 people held at Rikers are awaiting trial. The other 15 percent are serving sentences of one year or less, meaning that they will soon be returning to their communities. Collado says that restricting contact during visits "rewires how people interact with each other. What type of people are you sending home? Are you sending someone back home who is empathetic or someone who doesn't give a fuck?"

On September 8th, the Board of Correction voted to continue with the rule-making process, meaning that after a hearing in which members of the public are invited to comment, it will decide on the wording of the final rule and vote upon it. The Board may change the final rule to address concerns raised by the Department of Correction, family members, advocates and others who submit comments. Once passed, that final rule will decide how much the Department of Correction can limit physical contact and visits.

The date for the public hearing has not yet been set.

Noting that the Board released its proposed rule over the holiday weekend, Jennifer Parish, the director of Criminal Justice Advocacy at the Urban Justice Center's Mental Health Project, urged the Board to schedule multiple public hearings, including one in the evening so that family members and friends who work during the day can attend and speak. (Board meetings, including public hearings, are normally on Tuesday mornings.)

Two hours later, she joined other advocates, including faith leaders, family members and people who had spent time at Rikers, at a rally on the steps of City Hall against the proposed rule. They were joined by Council Member Daniel Dromm, who earlier this year had urged the Board not to begin the rule-making process.

"With these restrictions, it will be even more difficult and less likely for people to see their loved ones," he stated.

Anthony Collado was paroled in 2014. Today, he works as a personal trainer and credits being able to hug and touch his loved ones with reminding him that his path didn't end with prison.

"Contact visits are like emotional anchors to being human. You can forget to be human when you're not treated as a human," he reflected. "If I couldn't have loving contact with my family and friends, I would have forgotten that I was more than the fights, strip searches and iron bars. I would have chosen violence as my end-all be-all and I would have been lost."

Victoria Law is a freelance writer and editor. She frequently writes about incarceration, gender and resistance and is the author of "Resistance Behind Bars: The Struggles of Incarcerated Women." Follow her on Twitter at @LVikkiml