No Time for a Jets Slip-Up 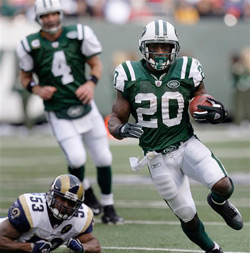 The Jets are 0-3 on the West Coast this season. At worst, they should be 2-1 -- losses to Oakland and San Francisco can't be forgiven even if the thrashing in San Diego can. They return there for the final time this season Sunday needing a win to keep control of their fate in the AFC East. If they win out, the division and No. 3 seed is theirs. If they lose Sunday, they are in danger of missing the playoffs.

The Seahawks are no good with Matt Hasselbeck, and they won't have him Sunday. Seneca Wallace is the quarterback, and with wind and even snow expected, things could get ugly. That favors the Jets, who have relied on Thomas Jones and a strong offensive line all season. The West Coast is one factor against the Jets. The other is that they just haven't looked good since their rout of Tennessee on Nov. 23.

Last week's win against Buffalo was an early Christmas present. If the Jets lose this one, they'll be giving one to Miami and New England a not-so-early one.

#football
#jets
#preview
#sports
Do you know the scoop? Comment below or Send us a Tip
A new Gothamist is coming! We’ve moved comments over to our beta site. Click here to join the conversation and get a preview of our new website.