Today, the NY Post headlined its story about a nearly 20% increase in reported subway sex crimes, "City subways are a pervert’s paradise." But is it really worse—or are there just better tools for riders to report incidents, as well as better-educated police officers?

According to the Post, 699 incidents were reported in the past five months (up from 593 in the same period last year): "The most common offenses are forcible touching, lewdness and unwanted surveillance, NYPD Deputy Chief Vincent Coogan told MTA officials at a meeting. Coogan said the rising number of complaints stems partly from riders getting more serious about inappropriate behavior and reporting it. He said cops have been able to make arrests in more than half the cases — an increase in busts — because more straphangers are snapping cellphone photos of perpetrators." Victims are also taking incriminating videos of the perverts. 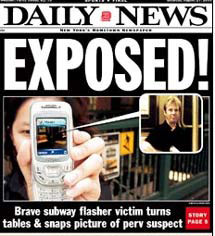 She ended up posting it to Flickr; we reported on it and then it made its way to the front page of the Daily News. And it turned out the R—as in RUDE—train rider was a vegetarian chef named Dan Hoyt, a serial subway flasher/masturbator, who was eventually convicted of public lewdness.

Still, there are recent instances of MTA workers or police officers not taking some claims seriously. Sometimes some people who report incidents at their local police precincts are told they need to go to a different precinct, the one where the incident occurred, which can discourage well-meaning citizens from filing the report. So that's why the MTA's website is a good place to report the crime.

#public lewdness
#sex crime
#subway crime
#subway masturbator
#subway pervert
Do you know the scoop? Comment below or Send us a Tip