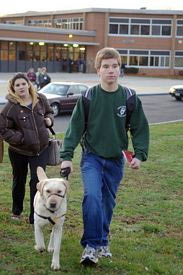 In violation of a ruling by New York State's Human Rights Division, the principal of W. Tresper Clarke High School stood in the schoolhouse doorway and refused entrance to 15-year-old John Cave yesterday, as long as he had his service dog with him. Cave is a deaf teenager with cochlear implants, and this week, the state's Human Rights Division Commissioner Kumiki Gibson declared the school violated two provisions of the Human Rights law (PDF) and ordered that Cave and his service dog Simba be allowed in school.

Normally, when the HRD hands down a decision, it's followed. However, East Meadow School District Superintendent Leon Campo said the Nassau County school district will hold out for a court order before it will admit Cave's dog Simba. Principal Timothy Voels and a sign language translator were waiting for Cave and Simba at the entrance and laid down the law, so the teen and his service dog went home without attending any classes yesterday.

According to Newsday, Simba is "trained to alert Cave to noises and oncoming vehicles. But school officials think the Labrador Retriever could aggravate or serve as a distraction to students with severe allergies and would pose a danger during fire and emergency lockdown drills. Cave's family countered that the 1,500-student school could be outfitted with air filters. They are also filing a lawsuit for $150 million against the school district for violation of his human rights.