'No One Is Above The Law': Thousands March In NYC To Protest Trump's New Acting Attorney General Kansas City residents Deborah and Jim Abel flew to New York City for a few days this week to "see some shows." But on Thursday night they diverged from their itinerary to join a protest against President Donald Trump's new acting Attorney General Matthew Whitaker, an outspoken critic of special counsel Robert Mueller's investigation into possible collusion between the Trump campaign and Russia.

"We're skipping dinner, too," Deborah said as the protest march, which started with a rally in Times Square, proceeded south of 40th Street.

Asked why they chose to spend one of their few nights in New York marching in a protest, Jim said, "I care about our democracy. You saw the unhinged behavior of Donald Trump at that press conference yesterday. The press is under attack. The Department of Justice is under attack. We are all vulnerable."

Soon after Wednesday's combative White House press conference, during which Trump refused to answer a question about the fate of then-Attorney General Jeff Sessions (among other things), news broke that Trump had fired Sessions and appointed his chief of staff, Matthew Whitaker, to replace him. It is unclear if this is legal—Whitaker has not been confirmed by the Senate under the Constitution's Appointment Clause—and it is also unclear how temporarily Whitaker will serve; he could conceivably remain in charge of the Justice Department through June 2019.

What is clear is that Whitaker, a former U.S. Attorney for Iowa who not long ago worked promoting hot tubs for a scam company that was shut down by the FTC, agrees with Trump that special counsel Robert Mueller's investigation has gone too far. In appearances on CNN and conservative radio, Whitaker has maintained that the Trump campaign did not collude with Russia to steal the 2016 election, and that the Mueller investigation should be starved of funding.

In a Wall Street Journal op-ed in May, Whitaker argued that Robert Mueller’s appointment as special counsel was unconstitutional. In June 2017, when Mueller's investigation was just a month old, Whitaker asserted in a radio interview that "the truth is there was no collusion with the Russians and the Trump campaign. The last thing they ["the left"] want right now is for the truth to come out, and for the fact that there’s not a single piece of evidence that demonstrates that the Trump campaign had any illegal or any improper relationships with the Russians. It’s that simple.” 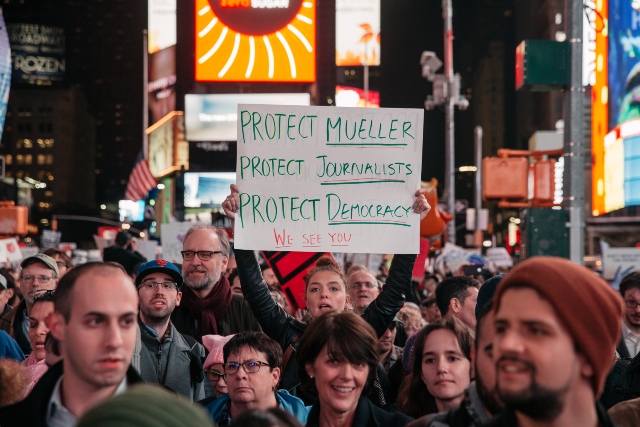 Whitaker is now the highest law enforcement officer in the United States, and has ultimate oversight over Mueller's investigation into whether the Trump campaign cooperated with Russia's attack on the 2016 election. Democrats and Attorneys General from 18 states, including New York, have called on Whitaker to recuse himself, and others have argued that Whitaker's friendship with Mueller grand jury witness Sam Clovis presents another clear conflict.

"Whitaker auditioned for the job—he knows Donald Trump watches TV all the time," said protester Janine Nichols, 65, a Crown Heights resident who marched in Thursday's demonstration. "So Whitaker goes on TV and criticizes the Mueller investigation. He's nothing but a loyal dog. This guy offends me to the very fiber of my being, and I'm not going to stand for it!"

Progressive groups have long been preparing for Trump to fire Sessions or take other action to shut down the Mueller investigation. MoveOn.org, one of the organizers of Thursday's march, collected emails from citizens nationwide over the course of the past year and half, promising to alert recipients to "rapid response" protests in the event that Trump "crossed a red line" by interfering in the investigation. This organization appeared to pay off, with simultaneous demonstrations unfolding in cities across America on Thursday night.

A lot of us came out in Seattle tonight to protect our democracy and the rule of law. #ProtectMueller pic.twitter.com/9a23eGJe6x

In Manhattan, thousands of energetic protesters wound their way down Broadway from Times Square to Union Square, chanting "Hands Off Mueller!" "No One Is Above The Law!" and "Donald Trump: What Are You Hiding?" Handmade signs declared that "We Won't Be Ruled By Putin!" "Whitaker Must Recuse!" and "Matt Whitaker Is A Pepe Toad And His Appointment By Fiat Is Unconstitutional!"

The brandisher of that last sign, Brooklyn high school physics teacher Mike Coughlan, said he felt the need to march Thursday because, as he put it, Republicans are not playing by the rules. "I believe in truth," Coughlan said. "I believe in science. I believe in reason. I feel the modern Republican party has lost its mind. Matt Whitaker was hired by virtue of his performance on Fox. It's unconstitutional. No one is above the law."

Just north of Herald Square, a man in a "Don't Tread on Me" T-shirt taunted protesters from the sidewalk. "It's been two years!" the man, incorrectly referring to the duration of the Mueller probe, yelled repeatedly at no one in particular, as passing demonstrators ignored him. "He's got nothing!" Told that Mueller's investigation has resulted in dozens of indictments and multiple guilty pleas and convictions, the man declared, "There is no evidence of any impeachable offense!"

A protester dressed in a sharp suit popped out of the march to briefly confront the counter-protester, declaring, "I'm a lawyer and I have a far greater understanding of this than you, and let me tell you: you're wrong." Both men then stormed off in different directions, shaking their heads, opinions unscathed.

Further downtown, 69-year-old Fay Bradshaw marched alone among the crowd, visibly incensed. "I have grandchildren," she seethed. "I want them to know truth and honesty. We have to have boundaries and laws. Whitaker is a fraud who already said he is against the [Mueller] investigation. He's got to go. I'm sick of it!"

Bradshaw said she immigrated to Brooklyn from Jamaica fifty years ago, and the current crisis in America is "the worst I've ever seen it. And I went through the whole Nixon thing. This is worse."

Kristina, a green card holder from Canada who declined to provide her last name because of her immigration status, concurred. "This is a living nightmare," she said as her husband lingered nearby, fretting that her comments to the press would jeopardize her status. "I am honestly afraid for this country."

Asked what he would tell Trump if he had the chance, Jim Abel, the tourist from Kansas City, said, "I would urge him to read the Constitution from beginning to end, which I doubt he has ever done."