No Non-Arabic Shirt, No Service 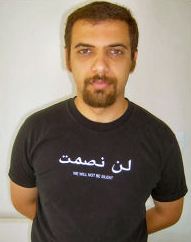 The NYCLU and ACLU are suing the Transportation Security Administration and Jet Blue over an incident where a passenger was forced to cover/change his shirt, which had Arabic lettering. Last year, Reid Jarrar, an American resident of Iraqi descent, was taking a JetBlue flight at JFK when a TSA official asked him to over his shirt, which read "We Will Not Be Silent" in both English and Arabic. The shirt's message is taken from the motto of an anti-Nazi resistance group, the White Rose.

Even though Jarrar made it through screening, a TSA official confronted him at the gate. From the NYCLU:

[TSA Inspector] Harris brought Jarrar to the JetBlue counter and told him that he would have to remove his shirt because other passengers were not comfortable with the Arabic script...

...According to the complaint, Harris told Jarrar that it is impermissible to wear an Arabic shirt to an airport and equated it to a "person wearing a t-shirt at a bank stating, 'I am a robber.'"...

...Jarrar attempted to assert his constitutional right to wear the t-shirt, but became intimidated after he was surrounded by Harris and several JetBlue officials. He worried he would miss his flight or be arrested and detained indefinitely. The lead JetBlue customer service crewmember stated that she would buy Jarrar a new shirt to wear on top of his own t-shirt as a "compromise." Left with no other choice, Jarrar reluctantly agreed, and was allowed on the plane only after the JetBlue agents ripped up his boarding pass and changed his seat from the front of the plane to the very back of the plane. He was then forced to board the plane first, even before disabled passengers and those traveling with children.

The NYCLU and ACLU claim that Jarrar's First and Fifth Amendment rights were violated. Also, a Hunter College student was allegedly told by a Department of Transportation official that she shouldn't wear the shirt on the Staten Island Ferry.

Related: The Post reports that the controversial new Khalil Ghibran School in Brooklyn have only six Arabic students out of 44 students who have enrolled for the school's inaugural year. Principal Debbie Almontaser was also criticized for first seeming to condone "Intifada NYC" t-shirts (made by a group that shares space with an organization she represents), but she later "condemned the T-shirt message's connection to Palestinian terrorism."

Update: Almontaser resigned as principal of the Khalil Ghibran school. Mayor Bloomberg made the announcement during his radio show; he said she was smart but also appreciated that she made the decision to resign because she felt she was becoming the focus, versus the the school itself.