No, New York City Is Not Hillary Clinton's "Hometown"

Now matter how many articles are published saying otherwise, New York City is not Hillary Clinton's "home" or "hometown."

This is not a jab at Clinton, who couldn't hide the fact that she moved to New York specifically because there was an open Senate seat if she tried, or even at my people in Westchester County. This is only to say that it's a Herculean stretch to call New York Clinton's "hometown" in the sense that her deep-rootedness gives her some sort of advantage, or in the sense that she has ever lived here.

Clinton's extensive political connections in the five boroughs, dating to her two terms as New York senator and the attendant Democratic party backing, can't hurt her diminished-but-still-over-10-percent primary polling advantage. But importantly, throughout her eight years as a senator and four years as secretary of Benghazi or whatever, when she wasn't living in Washington (where she and Bill have a mansion) or greeting foreign dignitaries in marble lobbies around the world, she kicked back in a stately five-bedroom in Chappaqua, a place that physically, spiritually, and geographically has nothing to do with the city of New York other than feeding it office workers and smog on weekdays, and creating unfortunate scenes on the Metro North on weekends. 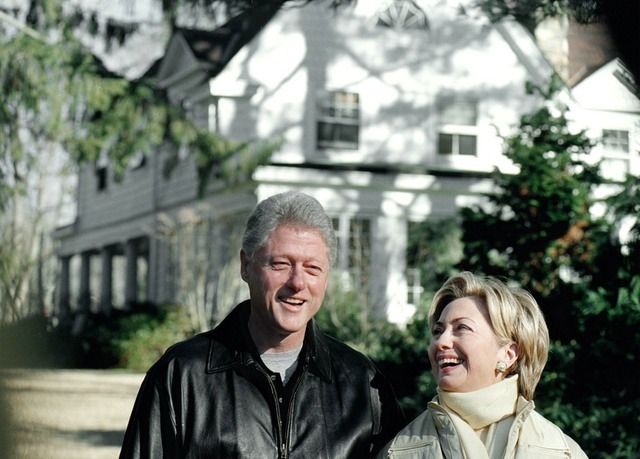 The Clintons in front of their newly purchased house in Chappaqua in 2000. (Chris Hondros/Getty)

For a counter-example, take the case for Donald Trump being a New Yorker. It is, scientifically speaking, a thousand times stronger, despite the wide geographic range of his extensive personal real estate holdings. The guy grew up in Jamaica Estates—suburban in style, but still in Queens—then took over his father's government-subsidized New York real estate empire, and allegedly his racist business practices, too, and he keeps an apartment in the penthouse of Trump Tower. He also, unlike Clinton, has a fairly consistent way of speaking, a testament to his background as a rich jerk from the greatest city on earth.

For further fodder to the great New Yorker Authenticity Debate, consider Bernie Sanders's Brooklyn accent, maintained over five long decades spent outside the city limits. Clinton has famously changed dialects several times in her life, and occasionally reverts to folksy Southern-isms when the setting calls for it, whereas throughout his time in bucolic Vermont, Sanders has talked like a dyed-in-the-wool New Yorker. Sanders may not have Chuck Schumer to hype the crowd for him, but he and Schumer share an alma mater in James Madison High School. Beyond that, Sanders came of age in a rent-stabilized apartment in Midwood, wiled away summers at Coney Island, and in his own neighborhood, entertained himself by throwing a Spaldeen ball at the wall for hours (for chrissakes).

In other words, Sanders may not be, as aide Tad Devine told reporters, "the voice of New York," but he undeniably has a voice of New York. Whether that and such issues as New York's income inequality—it ranks it is among the worst cities in the country for this—can drive New York voters to Sanders remains to be seen. 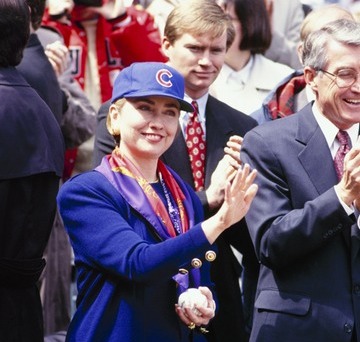 Clinton throws out the first pitch at a Cubs game in 1994. (Jonathan Daniel/Getty)

While we read the tea leaves/eagerly await a Brooklyn Democratic debate and the April 19th New York primary, here is a little more food for thought: at least Clinton knows how to hold a slice of pizza.

Fourteen years of municipal governance by Bostonians who pour salt on their slice (Bloomberg) and eat it with a knife and fork (de Blasio) seem to show that the ability to perform a simple fucking task properly does not rank high on voters' priority lists. However, Clinton deserves props for doing something not even Trump could get right. Case in point: when Trump entertained Sarah Palin in the city in 2011 he a) brought her to a Famiglia in Times Square, and b) downed the deeply mediocre slice with the assistance of a fork. John Kasich is from Ohio—what's Trump's excuse? Trump also once shilled for Pizza Hut's chief war crime, the stuffed crust, and managed to work in a joke about divorcing Ivana. (Classy!)

Bizarrely, all of the presidential candidates at issue have a Pizza Hut connection. Clinton's was apparently unauthorized: a send-up of her carpetbagger reverse migration from Illinois to Arkansas to New York, around which time she also claimed to be a lifelong Cubs AND Yankees fan (friends of Sanders, for what it's worth, attribute part of his antipathy to large corporations to the betrayal he felt when the Dodgers skipped town for LA).

Bernie's tie to the pizza-mutilating chain is sadder: he was recently spotted dining alone at a combination Nathan's/Pizza Hut in Penn Station. C'mon Bernie! You didn't have to do this to yourself! Pizza Suprema was right outside the door!