No More Statue of Liberty Ferry Service For Circle Line 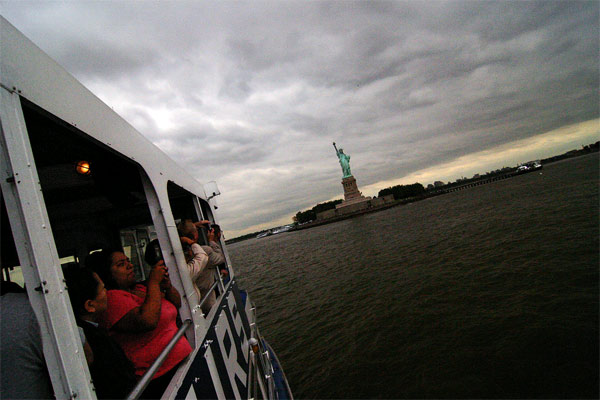 The 10-year contract, worth $350 million, must be approved by Congress and one requirement is that Hornblower buy Circle Line's eight-boat fleet. Hornblower's Alcatraz boats have flat-screen TVs and multimedia presentations, and the company says it might use its own boats in NYC. Fares, which are now $11.50 for adults and $4.50 for children, may increase by 50 cents when Hornblower takes over in October. Here are some interesting figures from the Times:

In part because of the terror attacks on Sept. 11, 2001 and increased security requirements, the number of visitors to Liberty and Ellis Islands has dropped by nearly a quarter recently. There were 4.2 million visitors last year, down from 5.5 million in 2000.

Since 1953, the Circle Line’s boats have taken more than 70 million passengers to Liberty Island and, since 1990, to Ellis Island. In 2005, the Circle Line’s revenue from the Statue of Liberty service exceeded $35 million, making it one of the six largest commercial operations in the national park system.

In 2005, the NY Sun reported that almost $2 million in funds had been misused by the Circle Line, which prompted concern from Senator Robert Menendez of NJ. Representative Anthony Weiner, who has been critical of Circle Line, is optimistic about Hornblower. And, of course, Weiner wants the Statue of Liberty's crown to be reopened to the public.

A month ago, it was reported that Circle was interested in offering solar boats for its service to Liberty Island. Hornblower has been working on the same thing for its Alcatraz service.