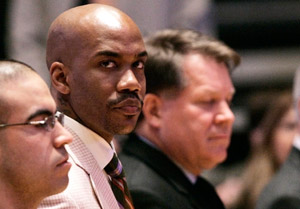 After a long absence, Stephon Marbury finally showed up at Madison Square Garden last night, but the circumstances of his absence remain a mystery. “I ain’t got no comment to that,” was Marbury’s response when asked if Isiah had told him to stay away from the team. Marbury did add that he was happy to be “able” to be on the bench and support his teammates. Was that a reference to the ban or simply an acknowledgment that he was injured and therefore couldn’t attend games?

What is clear is that Marbury wants to stay in New York:

"I want to be back here more than anything. I love New York. I love the fans. Our fans are the best. I pray to God I will. I love New York. It's the only place I want to be at. This is it. It's not too many players when they played on other teams they were a fan of another team. I honestly and truthfully can say when I was in Minnesota, I always spoke how I felt about New York. For me to finish my career here, bad time or good times, I think it means a lot to be able to do that."

Isiah has spent the past few months distancing himself from Marbury and it’s implausible to think that both of them will return next year.

Marbury will be in the final year of his contract and therefore would be valuable to a team looking to get under the salary cap. Isiah seems to have some sort of voodoo hold on Jim Dolan or he would have been fired a long time ago. Knicks’ fans, the biggest losers in all of this, are sick of all of them and wish they would all go away.