No Jail Time For Skinhead Who Beat Columbia Students On LES

A Washington D.C. skinhead has pleaded guilty to taking part in the beatdown of two graduate students at a Lower East Side bar and will be sentenced to community service, according to the terms of a plea deal reached this week.

John Young, pictured above, copped to misdemeanor assault and menacing in connection with the February attack, in which several right-wing skinheads pummeled the pair of Columbia University students outside Clockwork on Essex Street. The attack happened after the skins spotted an antifascist sticker on one of the men's phones, one of the victims told reporters.

Young is a member of the 211 Crew, also known as the 211 Bootboys, a New York-centered group of short-haired oi punk enthusiasts who share a penchant for nationalist politics and fisticuffs. Though multi-ethnic, the crew is friendly with neo-Nazis, known as boneheads in the insular skinhead subculture. Antifa, the loose-knit anarchist movement devoted to exposing and opposing those it deems fascists, has forcibly shut down speeches by right-wing figures and staged street fights with hard-right extremists in New York and elsewhere as Donald Trump's campaign gained momentum and turned into a presidency. Right-wing skinheads and their left-wing counterparts have been mixing it up downtown since the 1980s, though the scene's ultra-violence has all but faded from view in the intervening decades.

211 Crew members, many of whom reside in the New York suburbs, were in town one weekend in February for a show to raise money for a comrade arrested in Suffolk County on gun possession charges. Also that weekend was a show by the legendary English punk band Cock Sparrer. It was at a Cock Sparrer after-party at Clockwork, DJed by a 211 member, that a group of the toughs spotted the antifa sticker and zeroed in on the two victims, brothers, as they headed for the exit. The pair tried to run down Hester Street, but the skinheads caught up to them and stomped them some more, according to police. Young was among the assailants, and has now admitted to beating the men with brass knuckles and brandishing a knife at them. 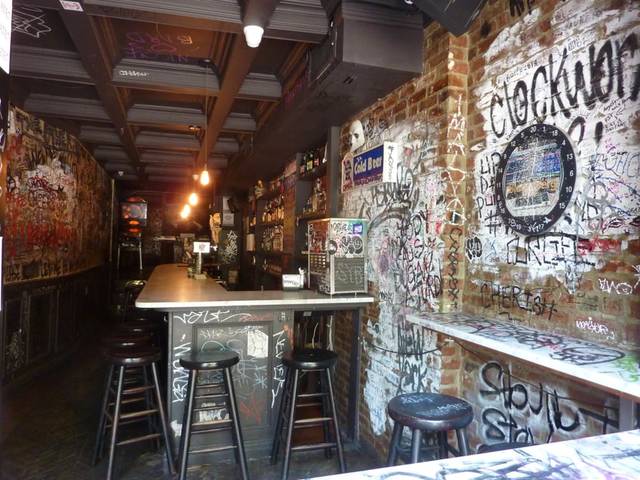 The beat-down began outside of Clockwork, a dive bar on Essex Street in the Lower East Side. (Yelp)

The night of the assault, officers in an unmarked car came upon the brothers bloodied on the sidewalk. Young was back at the bar, where the victims pointed him out. Police recovered bloody brass knuckles from the scene.

Both brothers were hospitalized and needed staples to close wounds on the backs of their heads. Young was also hospitalized, though it's unclear why. Four days after the attack, he told detectives at New York Downtown Hospital that the victims picked a fight with his friend. He claimed one of the academics was wearing an "Anti-Fascists" shirt and yelled, "You don't belong here. This is our bar," then swung at a friend of Young's.

"The other male punched me in the eye and when he did that I threw him into the trash, then they ran away," Young said, according to detectives' account. "I went back into the bar and then at some point the police came in."

Young said at the time that he carried brass knuckles for protection at his bartender job in D.C., but denied having any weapons the night of the beating.

As part of Young's plea deal, he agreed to undergo mental health treatment, and perform 10 days of community service. He had faced two felony assault charges, as well as weapons possession charges. Each of the felony counts carried a maximum sentence of seven years in prison. A judge could revoke his promised sentence if he does not abide by the terms of the deal.

Young did not respond to a Facebook message seeking comment. The Legal Aid Society, which provided Young's lawyer, did not make the attorney available for comment. The Manhattan District Attorney's Office provided relevant court documents but did not comment on the deal by press time.