By
Arun Venugopal
and
WNYC Staff

By
Arun Venugopal
and
WNYC Staff

Two people have been arrested for allegedly attacking a 16-year-old Jewish boy last week in Forest Hills, and members of the Jewish community are asking the NYPD to classify the incident as a hate crime.

According to the NYPD, two males, ages 17 and 18, were arrested on Thursday. The two are in custody at the 112th Precinct in Queens and were awaiting charges.

“It’s not a hate crime, and the victim is in stable condition,” said Detective Annette Shelton, a spokesperson for the NYPD.

The boy, David Paltielov, remains at Elmhurst Hospital one week after the attack, which took place on November 29. He suffered lacerations, swelling and contusions on his head and body.

The conclusion by the police that it wasn’t a hate crime is at odds with that of the Bukharian Jewish immigrant community, especially in the wake of multiple recent attacks and hate crimes against Jewish New Yorkers. According to the Alliance for Bukharian Americans, some witnesses heard the attackers scream anti-Semitic phrases such as “Kill the Jew.”

Yaniv Meirov, the CEO of the Chazaq organization, which also represents the Bukharian Jewish immigrant community, said it was “100 percent in my opinion a hate crime.”

According to Meirov and witnesses of the attack, at around 5 p.m., Paltielov was exiting Munch Place, a kosher eatery in Forest Hills, when he was attacked by a group of teenagers.

“This is a big group of guys, we understand twenty to thirty guys,” said Meirov. “And they start stepping on him, stamping on him. Punching him.”

Paltielov, who attends a yeshiva in Forest Hills, was wearing orthodox clothing, including a kippeh, or skullcap, and tzitzit, which Meirov said “are fringes on the corners of his shirt.” 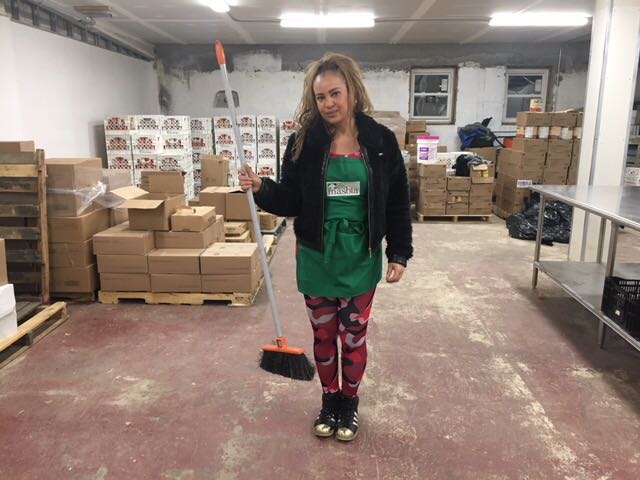 Waleska Mendez, a volunteer at Masbia soup kitchen in Forest Hills, intervened in an attack on a 16-year-old Jewish boy. (Arun Venugopal / WNYC)

One witness, Waleska Mendez, emerged from Masbia, a Jewish-run soup kitchen located on 64th Road in Forest Hills, where she volunteers. She was working inside when she heard the commotion.

“When I went out I saw the kid next to the tree, already on the floor. All the gang was kicking and punching him. So I started screaming ‘Leave him alone!’”

She rushed back in, grabbed a broom and ran back out, wielding it as a weapon.

“It was the first thing that I find,” she said. “I was screaming and trying to hit them.”

Listen to Arun Venugopal's WNYC report on the incident:

The attackers soon ran away. One of them, she recalled, was wearing a ski mask. She immediately turned her attention to the crowd of young onlookers, many of whom were recording the attack on their phones.

“That was really pissing me off,” she said, adding that she exchanged profanities with them.

“One of them was trying to get on top of me. I just throw the broom, and said ‘You want to fight? Let’s do it.’”

An employee of the soup kitchen, Harry, who asked that his last name not be used due to fear of retaliation, said he emerged to find Mendez in a confrontation. He told onlookers to call 911 and found the victim on the ground, his head next to an SUV.

“There were really about a hundred students there,” he said. “There were a lot.”

Adam Suionov, Director of the Alliance of Bukharian Americans, said the victim has no internal bleeding but has suffered physical trauma.

“He's communicating but there are certain things he forgot how to do.”

Jewish community members have been observing safety precautions after a spate of incidents, including an assault against a Hasidic man in Brooklyn. In Forest Hills, Meirov said they’ve been warned to always walk in pairs.

The fact that the victim in Forest Hills was visibly Jewish, said Meirov, has led many in the community to question the NYPD’s initial response. The community and local elected officials met with police officials on Monday. Another community forum is scheduled for Thursday evening.

Update: The two alleged assailants, Jonathan Torres, 18, and a 17-year-old male, were both charged with first-degree felony gang assault and second-degree felony assault. They were taken to Central Booking and will see a judge in Queens Criminal Court.

At Thursday's community forum, the NYPD stressed that the investigation is ongoing. They are trying to obtain as much street camera video as they can. They also noted that there were conflicting accounts as to whether the victim was in fact dressed in Orthodox clothing and raised the possibility that this was a case of mistaken identity.

You can submit tips about hate crimes to ProPublica's Documenting Hate project. ProPublica is collecting and verifying reports, building a database of tips for use by journalists, researchers and civil-rights organizations.

Arun Venugopal is a reporter who focuses on issues of race and immigration at WNYC. You can follow him on Twitter at @arunNYC.

Arun Venugopal is a senior reporter for the WNYC and Gothamist Race & Justice Unit who focuses on issues of race and bias in our region. His reporting also tackles the topics of immigration, faith, and inequality. Arun serves as the regular fill-in host of the station's "U.S. of Anxiety" program. Arun was the creator and host of Micropolis, a series about race and identity. He is a contributor to NPR's Morning Edition and All Things Considered. He has appeared on PBS Newshour, On the Media and Studio 360, and has been published in The Guardian, The Wall Street Journal and Salon. He also frequently serves as an emcee and moderator of panel discussions on race, religion, and identity issues and has been a guest host of NPR's "Fresh Air." He lives with his family in Queens.