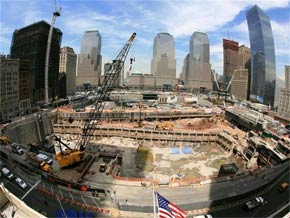 After months of discussions, Merrill Lynch has ended talks about moving its headquarters to one of the planned towers at the World Trade Center Site. The NY Times describes this as a "major setback for the Port Authority" and Silverstein Properties.

Apparently "Concerns about stirring memories of 9/11 and the long-term noise and construction at the site" have been factors in the lack of strong interest in the site from companies. And developer Larry Silverstein may have trouble raising money for the building of Towers 2, 3, and 4--there are talks of other firms moving to Ground Zero, but they are not firm.

Rebuilding at the WTC site has already been confirmed as delayed and well over-budget by the Port Authority. And last fall, it was suggested Merrill Lynch, which has had billions in write-downs, would move to Midtown in a building to be built where the Hotel Pennsylvania now stands but the Times says the firm is renegotiating its lease at the World Financial Center.