No DNA Test for Edwards, Love Child Still a Mystery 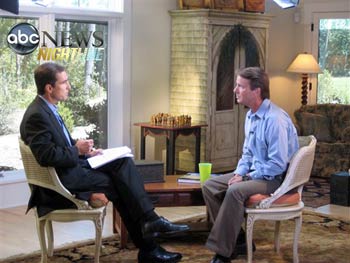 Rielle Hunter came out yesterday and said that she will not make her former lover John Edwards take a paternity test "now or in the future." Edwards has denied being father, saying that his relationship with Ms. Hunter ended long before the pregnancy that resulted in Ms. Hunter’s giving birth on February 27. Rielle Hunter did not indicate a father on Frances Quinn Hunter's birth certificate.

Questions still remain about the man who has claimed that the child is his, Andrew Young, a close friend and confidant of Edwards. The NY Times says that when allegations that Edwards was the child's father last year arose, Young "suddenly surfaced and issued the statement that the baby was his. He abruptly quit his position with Mr. Edwards and, with financial help from a wealthy Edwards supporter, Fred Baron, packed up his family and went into hiding." They also speak to anonymous associate of Edwards who said that Young "privately made conflicting statements about the extent of his relationship with Ms. Hunter and whether he is the child’s father."

The NY Daily News has an interview with Hunter's old boyfriend author Jay McInerney who calls Edwards confession "half-assed" and says he was surprised that Hunter fell for Edwards. "She's not attracted to conventional guys - and Edwards, with his haircut and all, is a conventional guy," McInerney tells the News. The NY Post meanwhile revealsHunter's nickname for Edwards from a 2006 email: Love Lips.

#affair
#Andrew YOung
#john edwards
#paternity test
#rielle hunter
Do you know the scoop? Comment below or Send us a Tip