“No collusion!” said Hope Burns, who came from New Jersey with her husband and adult son, when asked about what she expected Mueller had found.

What was behind all the investigating?

The three-hour Trump Tower-adjacent demonstration, which lacked an apparent leader, raison d'être, or collective undertaking — aside from a green MAGA-hat wearing man ranting into a megaphone as onlookers chimed in— came the day after Mueller submitted his Trump-Russia-investigation report to Attorney General Bill Barr. A few hundred Trump supporters— many coming from outside the city, and some from outside the state—chanted and hoisted signs that read “Happy No Collusion Day,” “I stand with Judge Jeanine [Pirro]” and “Drain the Swamp.” The rally elicited occasional honks and fist pumps in solidarity from passing motorists.

And like at other pro-Trump events, there were open expressions of racism and xenophobia (“Go back to Pakistan!” one participant shouted at a man driving by in a yellow taxi), adherence to conspiratorial falsehoods pushed by the president and his allies (of the Seth Rich, George Soros, Hillary Clinton, undocumented-immigrants-voting varieties, among others), and broad anti-media invective. 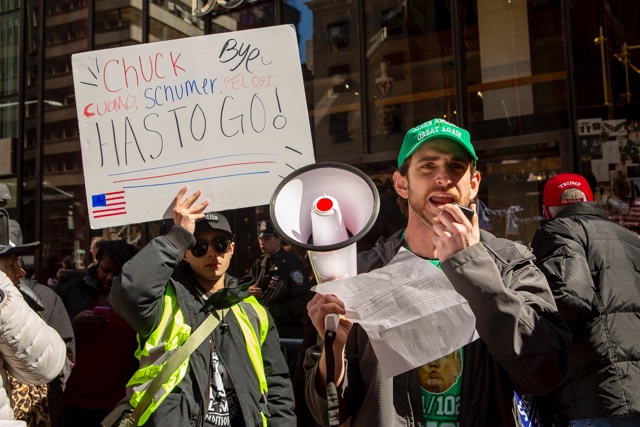 Manny Ferrer, a sales associate who claimed First Lady Melania Trump has been his client “for a very long time,” was one of many attendees who accused the media of falsely reporting on the many allegations against Trump and his circle.

“I think there’s a lot of leftist media propaganda on most of the news channels taking over,” Ferrer said. “I don’t buy it.”

Most were unworried about what Mueller’s probe would unearth, some suggesting the public already knew there hadn’t been any “collusion” between Trump and Russia; others preemptively refused to trust its unknown findings; some argued the investigation was a sham, squandering time and money—all unsurprising sentiments, given Saturday’s rally consisted mostly of Trump’s dyed-in-the-wool fans.

“I think it’s a whole witch hunt,” said Marko Kepi, an Albanian-born property manager and political activist who lives on Staten Island, “so I think at the end of the day, he’s going to be all clear.”

Joseph McGowan, a retiree who lives in Port Jefferson, guessed the Mueller probe would be incriminating for unspecified Democrats.

“It’s going to be a slaughter … of the Democrats,” McGowan predicted.

Vered, an art dealer originally from Israel, who would only identify herself by her first name, also speculated that Mueller would uncover dirt on Trump’s rivals, not the president.

“They’re looking for so much, for so long, and they couldn’t find anything,” she said. “If you want to get into Russia, you have to get into what Hillary did with the Russians.”

“Two years [and] you can’t find anything?” fumed retiree Stella Coyle, who lives in Rockland County. “I would imagine in that report they probably found things on the other side. … On the left side, I believe that they have Russia collusion.” 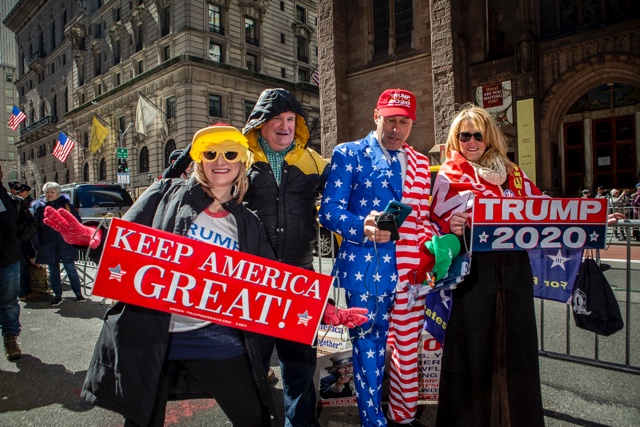 Chris Edwards, a retired New York City firefighter who made the trip from Orange County for the event, told Gothamist he was disappointed money had been spent on the probe into Trump as the 9/11 Victims Compensation Fund runs low.

“Thirty-four million dollars was a waste of taxpayer money, when they actually knew that it wasn’t any collusion in it, and they went and did it anyway,” he said. (As of March 1st, the cost of the special counsel investigation was reportedly around $25 million, with some speculating that once former Trump campaign chairman Paul Manafort’s asset forfeiture is taken into account, the probe might pay for itself and then some.)

But what about the fact that multiple Trump associates are already going to prison? That Trump has surrounded himself with unsavory figures and criminals was neither a surprise nor something that made Trump’s supporters think any less of him. After all, he’s a New York businessman and real estate developer like any other, the ralliers said.

Retired MTA bus employee John Provetto said Trump associates were being punished for “process crimes” —a recent Republican talking point— and didn’t think their criminal conduct had any bearing on the president.

Angel Rivera, a New York City-born graphic artist who lives in Union County, NJ, shrugged when asked if it bothered him that Trump surrounded himself with shady figures like his erstwhile lawyer Michael Cohen and Manafort, who were sentenced to three and seven-and-a-half years in prison, respectively.

“Who doesn’t?” he said, arguing that Trump’s cast of wingmen is no more sordid than anyone’s acquaintances. “I know a whole bunch of people who I don’t know what they do behind closed doors. That’s just life.”

And even if Trump had made less-than-prudent choices, the malfeasance is much more severe on the other side of the aisle, multiple attendees argued.

“Don’t get me wrong, I don’t think Trump’s an angel,” said Fred Fischetti, a former plumber who now delivers medical supplies and traveled from New Jersey to the rally, “but I think he’s a better angel than Hillary ... or [Senate Minority Leader Chuck] Schumer or [House Speaker Nancy] Pelosi.”

The Republican president is of course very unpopular in his heavily blue home state—even more so in New York City— so predictably some passersby did not take kindly to the demonstration. While there were no physical and few particularly impassioned clashes between the president’s backers and opponents, the rally participants were on the receiving end of some heckling.

Duncan Meyers, for example, poked his head out of the passenger window of a cab to shout that the barricaded rally area was “meathead central.”

“It’s very small,” he told Gothamist, referring to the demonstration's size, before his car sped away, “so that’s heartening.”

#mueller report
#president trump
#Trump Tower
#original
Do you know the scoop? Comment below or Send us a Tip
A new Gothamist is coming! We’ve moved comments over to our beta site. Click here to join the conversation and get a preview of our new website.