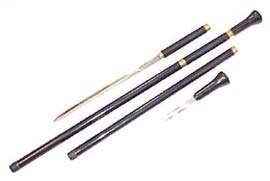 There are some things needed while reporting for jury duty. Reading material, maybe some snacks, a lot of patience... but a sword and a dagger aren't on the list. But that's what a city employee, headed to Brooklyn Supreme Court, did bring.

The Post reports that 40-year-old Vladislav Lisetsky, who works in the Human Resources Administration, brought in a cane that concealed not only a two and a half foot sword at one end, but a 6 inch dagger at the other. Everyone who goes to the courthouse is screened, and items like canes are screened as well. According to Maj. Luz Bryan, who heads the security officers, Lisetsky's cane "attracted attention because of the way it looked. It had two metal bands. It's an indication that something is concealed. My officers noticed it right away."

Upon seeing the two weapons, Lisetsky apparently told the officers they could keep the sword, to which one replied, "We are going to keep it. And we're going to arrest you." Lisetsky, who claimed he didn't realize the Amazon purchase was illegal and used it as a cane, was charged with criminal possession of a weapon. Sword canes are illegal in New York, as are concealed blades and knives.