A giant, inflatable rat in New York both stands out and blends in: His bared fangs and bloodshot eyes have become part of our streetscape’s visual vocabulary, the racket from his generator subsumed in the ambient din. Oh, and don’t forget his scab-covered belly, a not-so-subtle allusion to “scab” workers who cross picket lines, along with the source of his nickname: Scabby the Rat.

But will we miss him when he’s gone?

We might be about to find out, thanks to an advice memorandum by the Trump-appointed general counsel at the National Labor Relations Board, who has declared it should be illegal for unions to use rats and other inflatables to protest a company’s unfair employment practices.

The memo is credited to an associate counsel at the NLRB’s Washington D.C. office. But a source at the board who declined to be named told Gothamist/WNYC News that it expresses the will of general counsel Peter Robb, an attorney with a long career at firms that advise and advocate for management. Since taking the reins in November 2017, Robb has moved swiftly to consolidate the agency’s powers of adjudication by taking it away from senior civil servants at 26 regional offices and giving it to a reliably conservative group of officials at D.C. headquarters.

Robb’s view is that inflatables such as Scabby are “coercive” and “unlawful.” His implied conclusion, which was sent to the regional offices, is that they should be banned.

The occasion for the opinion involves a recent beef over wages between an electrical workers union and a construction company in Chicago. (Coincidentally, Scabby the Rat was born in Chicago in 1990 when a company called Big Sky Balloons created him for a bricklayers union.) Union reps went to the construction site and hung a yellow banner that read, “LABOR DISPUTE: SHAME SHAME.” Then, according to the memo, “They also set up a large, inflatable fat cat, 10 to 15 feet tall, clutching a construction worker by the neck.”

What happened next proves that a union inflatable needn’t be a rat to be effective. Two workers arrived at the job site, beheld the murderous Fat Cat, then turned around and went home. They presumably didn’t want to be called scabs.

The company, Summit Design + Build, filed a complaint with the NLRB. The case was ultimately settled but it gave Robb the chance to state that, in his official opinion, Fat Cat created a “symbolic, confrontational barrier to anyone seeking to enter or work.” His memo also concluded that inflatables used by unions, and even banners, should be considered commercial speech and subject to regulation. And not only that: the memo went on to call them an illegal form of picketing. The opinions set the stage for a case that could set a new anti-inflatable precedent. 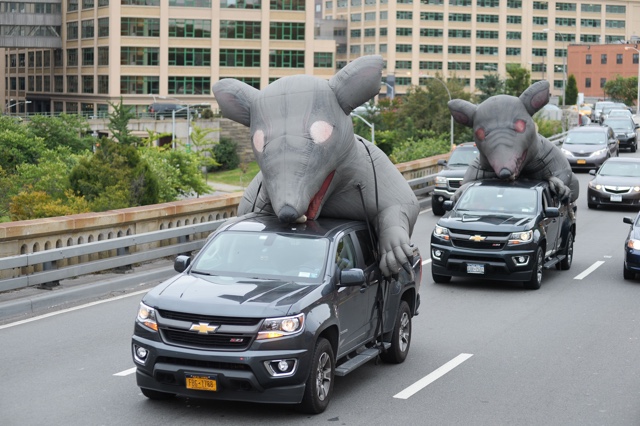 Such a case might come from Staten Island. Last month, the owner of the ShopRite on Hylan Boulevard filed a complaint with the NLRB about a pair of Scabby the Rats that appeared outside the supermarket. If the case is not settled, it will go before an administrative judge at the NLRB who’s been advised by the general counsel’s memo that Scabby is impermissible.

The resulting ruling could sweep all the inflatable rats and cockroaches and fat cats and moneybag-clutching plutocrats not just from the streets of New York but job sites around the country. If the ruling doesn’t quite do that, it could very well curtail the use of union inflatables by limiting their locations and hours of display.

Such a decision would reverse consistent NLRB rulings during the Obama administration. At least three times, judges at the board said that as long as Scabby is stationary and doesn’t block a building entrance, he’s a fair labor practice. But the groundwork seems to have been laid to reverse that view.

Richard Weiss, a spokesman for the Mason Tenders Local 79 in New York, said banishing Scabby would be a tactical loss for unions.

“It’s hard to break through in New York City on a cause,” he said. “There are millions of people here and everybody has their own issues. Yet when you walk down the street and see a twelve-foot inflatable rat, it does call attention.” 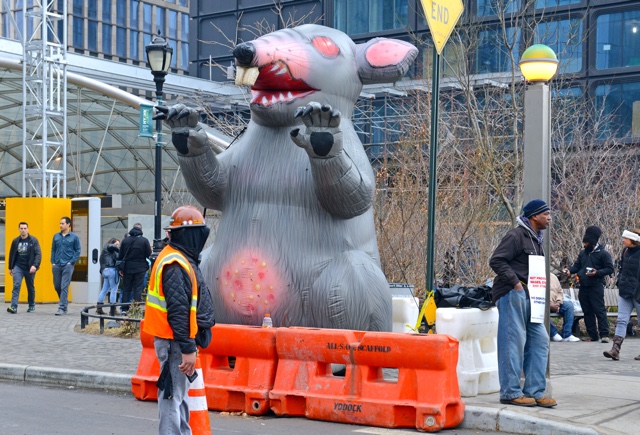 Weiss said his union alone has six to eight inflatable rats—he couldn’t recall the exact number—which organizers keep in their vehicles so they can easily be deployed around the city. However, he admitted that not everyone feels a sense of solidarity when they come upon a snarling union rat. A few years ago, a man rushed up to a Scabby stationed in Lower Manhattan and stabbed him in his mangy rubber gut. The rat deflated but the wound wasn’t fatal. “We patched him up and got him right back out there,” Weiss recalled. And that rat got off lightly compared to a Scabby in Chicago who was shanked with a box cutter and run over by a car.

Both attacks exemplify what we already know about rats: They’re scrappy, they multiply, and they’re hard to kill. The National Labor Relations Board may now be trying to commit symbolic rodenticide. If that happens, Weiss says the board can expect a lawsuit defending inflatable vermin on First Amendment grounds.

#inflatables
#national labor relations board
#nlrb
#protest
#scabby the rat
#union
Do you know the scoop? Comment below or Send us a Tip