Thomas Gallagher, the New Jersey Transit engineer operating train #1614 when it sped through a concrete and metal barrier in Hoboken last Thursday morning—killing one woman and injuring more than 100 commuters—says he has no recollection of the crash, according to federal investigators.

The vice chair of the National Transportation Safety Board, T. Bella Dinh-Zarr, told reporters during a Sunday press conference that Gallagher, 48, believes he entered the Hoboken station traveling at 10 miles per hour. The engineer also told investigators that he recalls blowing the horn, ringing the bell, and checking the train's speedometer as he entered the station. The next thing he knew, Gallagher said, he was regaining consciousness.

The majority of the trip, which originated earlier that morning in Spring Valley, was reportedly without incident. Gallagher said that he had good visibility, was well rested, and had his cellphone stowed. An engineer since 2000—he worked his way up from his first ticket-selling gig in 1987—Gallagher had no medical episodes, criminal history, or other infractions on his record prior to the incident. He was injured in the crash, but was released from the hospital the same day.

The train's conductor also told investigators that he didn't notice anything unusual about Gallagher that morning.

According to NJ Transit, the train struck the Hoboken Terminal building on track five, around 8:45 a.m. on Thursday. "There's an old-style ceiling that's in that portion of the station," New Jersey Governor Chris Christie told reporters last week. "It took out a number of the supporting structures, collapsed the ceiling, and came to a stop at the wall that leads into the terminal." The one fatality was Fabiola Bittar de Kroon, a 34-year-old woman who was standing on the platform at the time of the crash and was struck by falling debris. 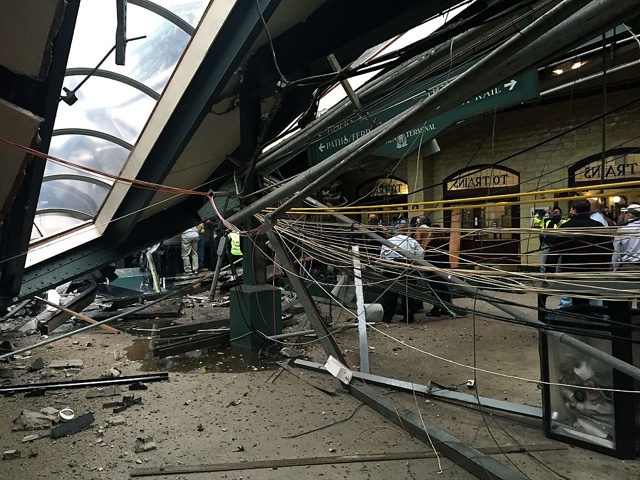 Witnesses said that the train was going so fast when it struck the barriers at the track terminus that it became airborne. However, the exact travel speed is still unknown. In a significant investigatory setback, the NTSB announced Sunday that one data recorder recovered from the train—a so-called "black box"—wasn't functioning on the day of the crash. Dinh-Zarr stressed Sunday that there is a second data recorder in the front of the train, which investigators won't be able to access until the front cars are deemed safe to enter. If the second recorder is functional, it should have information on exact speeds, and whether the brakes and horn were applied.

Commuter trains are only required to have one black box, in the front of the train.

On Saturday, the NTSB announced that track signals leading into the terminal were working normally on Thursday. The Hoboken tracks are not equipped with Positive Train Control (PTC), a federally-mandated system that can control train speeds automatically. The deadline for PCT installation has been pushed back numerous times, and is now set at December 31, 2018.

"But what we need to remember is PTC cannot prevent every train accident," Dinh-Zarr told reporters on Sunday. "We will look to see if it affected this one. We just don't have enough information yet."

A recent federal investigation revealed that NJ Transit has had more than 150 accidents over the past five years, resulting in more than $4.8 million in damage to tracks and equipment. The New Jersey transit authority has also paid more than $500,000 to settle safety violations in that time period.

NJ Transit service in and out of Hoboken Terminal is still suspended as of Monday. NBC has a full breakdown of the ongoing transit changes and cross-honoring with PATH, buses, and ferries here.