NJ Terror Suspect Wanted To Take His Cat To Egypt

The backgrounds of the two young NJ men who were arrested earlier this week for allegedly plotting to travel to Somalia and kill American troops have been scrutinized, but now the NY Times takes a look at the formative years of Mohamed Mahmood Alessa and Carlos Almonte: "Their stories began like many others: troubled teenagers who scare and mystify their neighbors; run-ins with the police while still in high school; parents who cannot compete with the sense of belonging or purpose their boys find elsewhere."

Alessa's parents, "who began taking him to psychiatrists at age 6 and medicating him in a vain struggle to control his moods"—he stopped taking medication and seeing therapists about three years ago, agreed to be interviewed. (Both suspects' families reportedly cooperated with the feds.) His mother, who previously said he was "crazy," said, "Of course we tried everything we could. We couldn’t just keep him at home," but also admits that she and her husband spoiled him. She showed the Times a tender picture:

About two weeks ago, Ms. Alessa snapped a picture of her son that she keeps on her cellphone, a reminder of a serene moment in their home. It shows Mohamed lying on a floral quilt, snuggling Princess Tuna, his cat.

He wanted to take the cat with him to Egypt, but his mother said no, and they argued. When he headed to the airport, he went instead with a big bag of candy from his parents’ deli. The F.B.I. seized the candy, his mother said. 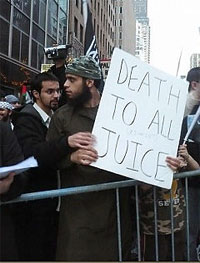 Carlos Almonte at a protest in 2008

Alessa had told his parents he wanted to study Arabic in Egypt; the federal authorities claim that he was traveling to Cairo and then to Somalia to join a violent extremist group.

As for Almonte, his conversion to Islam, after being caught with a knife at school and drinking in the park, shocked his Dominican family: "On a Facebook page started in October 2008, Mr. Almonte posted long quotations from medieval Islamic scholars and present-day radicals like Abu Qatada, considered by many countries to be a terrorist, and the jihadist cleric Abu Hamza al-Masri. Mr. Almonte was also outraged at the treatment of Muslim prisoners accused of terrorism... He posted a photo of himself at a Dec. 28, 2008, protest in Manhattan, holding a sign saying 'DEATH TO ALL JUICE,' with the word 'ZIONIST' written faintly above “JUICE.'"

In court on Thursday, Almonte was reportedly silent and "frazzled-looking" while Alessa "acted like a clown, laughing and smirking."