NJ Man Did Cheat on Wife with Ashley Dupre 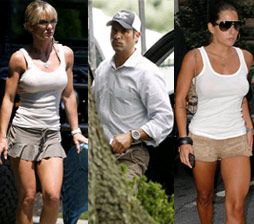 The married NJ asphalt company executive admitted to the NY Post that he did have an extramarital tryst with Spitzer hooker Ashley Dupre earlier this week. Thomas "TJ" Earle said, via a lawyer, "I'm very ashamed."

Earle was noticed at the Gramercy Park Hotel with Dupre on Tuesday, thanks to paparazzi hoping for a glimpse of the hotel's celebrity guest, Lindsay Lohan. Though some speculated Earle told his wife that he was set up, his lawyer told the Post, "TJ has accepted full responsibility - he's not blaming anyone else...TJ never said he was set up. He does not feel used by Ashley one bit." Well, it is pretty passive-aggressive to go to a celebrity-magnet hotel with an infamous hooker.

What makes things a little worse is the fact that Earle apparently celebrates his anniversary with his wife at the same hotel each year. His lawyer added his client is "very, very sorry for what happened, and he's trying to work through this privately." Of course, that means the Post is examining whether Alisa Earle is copying Dupre's style. The tabloid noted Mrs. Earle "[proved] she could easily compete with Dupre's hooker-high platforms" by "[wearing - and drawing] attention to her long, tanned legs - with a pair of sexy, 3-inch-high, open-toed sandals."

#affair
#Ashley Alexandra Dupre
#ashley dupre
#Gramercy Park Hotel
#thomas earle
Do you know the scoop? Comment below or Send us a Tip