The New Jersey high school that initiated a bullying investigation over a student's tweets condemning Israel and mentioning an unnamed classmate has found that the messages did not constitute bullying, according to the ACLU of New Jersey, which took up her case.

The tweets, made by Fair Lawn High School junior Bethany Koval over winter break, prompted school administrators to call her into the office one morning in early January. Koval is a prolific Twitter user, and she instinctively recorded and recapped the meetings with school officials. One recording captured one administrator insinuating that she could have violated the state's strict anti-bullying law. She also wrote that she was denied a lawyer, and later threatened with a lawsuit for having "filmed." Koval's account of being "silenced" "for being anti-Israel" drew international attention from Palestinian rights and free speech activists, prompting a flood of emails and phone calls to the school, and exposing bitter divisions among classmates.

"I am grateful for this ruling that posting my political opinions online was not considered bullying and for the fact that my speech didn't deserve official censorship," Koval said in a statement. "The manner in which the bullying law was used in my case was not in the spirit of free speech. It's unfortunate that such a noble law in principle was used to justify something as troubling as chilling students' speech." 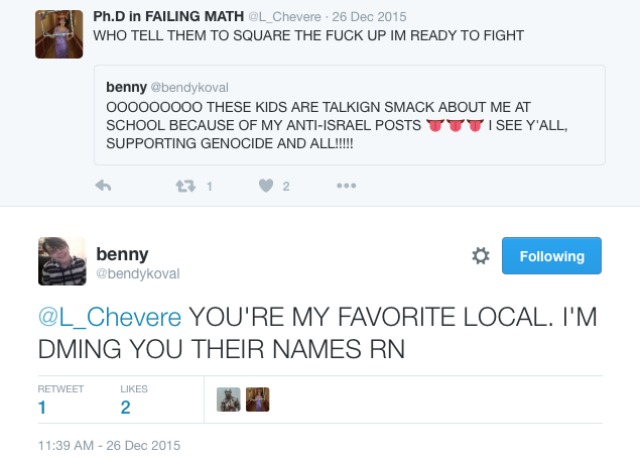 Koval has said of this exchange "of course it didn't go farther. She didn't even know the girl." (Twitter)

The investigation seemed to focus on tweets in which Koval bemoaned that "KIDS ARE TALKIGN SMACK ABOUT ME AT SCHOOL BECAUSE OF MY ANTI-ISRAEL POSTS 👅👅👅," and offered to direct-message their names to a classmate who wrote that she was "READY TO FIGHT." Also: a tweet where Koval celebrated being unfollowed by "that pro-Israel girl from my school," and concluded "FUCK ISRAEL FUCK ISRAEL FUCK ISRAEL FUCK ISRAEL." No violence came of any of this, according to Koval, her lawyer, and other Fair Lawn students.

Koval returned to school briefly the day after her first interviews, but left before lunch, and as of late January, she had not returned, according to a classmate. About 100 parents and area residents rallied in front of the school that weekend to express their support for the administration and condemn accusations of political censorship. Koval is now back at school, according to her lawyer.

In her statement provided by the ACLU, Koval said she doesn't regret the shitstorm she caused by calling out her school online:

"If I hadn't documented the incident online and garnered so much support, I might have been intimidated into silence. Through it all—in-person and online harassment, losing family and friends, a 90-person rally at the high school in support of the bullying charges, vandalization of our home, and the impact of everything on my outlook—my views have only grown stronger, and my voice, louder."

ACLU attorney Alexander Shalom said that the Kovals' house was egged. The family doesn't know the identities of the culprits, but he said, "When a town holds a protest in favor of you being disciplined by the school and then your house gets egged, I don’t think it takes a real Sherlock to figure out that there’s a causal connection."

"I cannot tell you how relieved my family is for this investigation to be over and for the school to have determined that Bethany’s speech wasn’t harassment, intimidation, or bullying," said Debra Koval, Bethany’s mother, in a statement. "I feel like my daughter’s rights have been vindicated now that she’s no longer under suspicion for being something that’s the opposite of who she is. I hope the school’s finding sends the message once and for all that expressing your opinions, even when they conflict with deeply held beliefs, is not something that deserves to be punished."

Fellow student Josh Pasternak, a senior and head of Fair Lawn's Jewish Student Union, said that there was a distressing fallout from the investigation, but the focus wasn't what happened between Koval and the unnamed girl. Instead, in Bergen County, where an estimated 7.5 percent of the adult population is Jewish, compared to 1.8 percent nationally, the controversy turned into a mass argument about the Israeli-Palestinian political situation.

"I got texts that night saying, 'Josh, you’re not going to believe it, the way the Israel-Palesitnian conflict is being brought up on Twitter, the way the students are getting involved in it,'" he recalled.

When a New York Times article appeared the next morning, "that's when things got kind of crazy."

When that dropped, every classroom became a platform for the Israel-Palestinian debate. The student body lost focus that it was a [bullying investigation] issue. They lost context on everything but the content of her tweets. In the halls, people were chanting "Free Palestine." I feel like it was maybe said in jest, but it's a heavily Jewish town. We all wore clothing representing our Jewish culture. My friends wore Star of David necklaces. I wore my [Israel Defense Forces] sweatshirt.

Pasternak said that students passing by small groups arguing would ask what was being discussed and the conflict would snowball, turning classes into yelling matches, sometimes sanctioned by teachers, other times not.

"It was shocking, because we live in a town that's extremely Jewish," he said, "and all of a sudden you have all these anti-Israel feelings in the hallways....It had never been debated with such intensity."

As for Koval, who refers to herself online as an Israeli Jew but is said to have been raised Catholic by a mother who converted from Judaism and a Catholic father, Pasternak said that her statements "reflected poorly on the Jewish community." "Just because you have family in Israel and Jewish ancestry doesn’t necessarily that you’re the spokesperson on Israel."

There are lessons for everyone in the passionate flare-up, he said:

If we’re going to be on the internet being so political and passionate, we should keep this in mind when we get this attention, when we're trying to spread our views and trying to have as many people see it as possible. She wasn’t ready for that. She wasn’t ready for the intensity and attention of the situation. When we follow in her footsteps, the actions we take on the internet matter have consequences on and off the internet.

The controversy died down, but hung around as a "low subtle feeling," he said, and when there were bomb threats at Bergen County schools later in January, "immediately afterwards we look at each other and wonder, was it because of that what happened a few weeks ago?"

The situation also directed new attention at New Jersey's anti-bullying law. Passed in 2011 following the suicide of Rutgers University student Tyler Clementi, it is considered the strictest in the nation, and requires a formal complaint of each reported instance of bullying.

Shalom, the ACLU attorney, said that in Koval's investigation, ultimately, "the school got it right." The law, he said, is not the problem so much as the way education administrators implement it, particularly when they target political speech and speech made outside of school.

"Schools just need to be mindful that while they have a legitimate role in policing bullying, they don’t have carte blanche to police student speech from off-campus," he said. "And they need to be particularly conscious about that when it deals with fraught political issues like the Israeli-Palestinian conflict."

Koval had made her Twitter account private for the duration of the investigation and drastically cut down on her posting, but she reopened the account yesterday evening.

The Fair Lawn Public Schools superintendent did not respond to comment requests made through his assistant.